Where does sorghum come from? African food 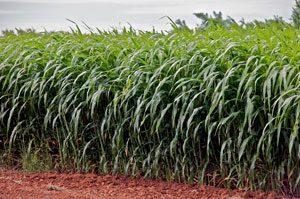 A field of sorghum growing

Sorghum, like millet, is one of the plants that African people figured out how to farm and then spread to the rest of the world. It’s a kind of gluten-free grain, about five feet tall, that grows wild all across Africa, Asia, and Australia. Sorghum doesn’t need very much rain, so it’s a good crop for China and Sudan and North Africa by around 8000 BC, and maybe much earlier. By around 2000 BC, people in in sorghum beer, and they also baked sorghum bread. 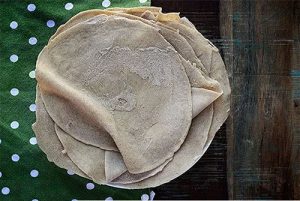 Sorghum crepes (kisra) from Sudan. Thanks to Global Table Adventures

From Sudan, sorghum and millet farming spread east to Harappan India by about 1500 BC, and from India it spread to Southeast Asia. Sorghum took longer to spread westward, and it was only after 300 BC that the Garamantes, in southern Libya on the northern edge of the Sahara Desert, used new irrigation techniques to start farming sorghum and millet. These Libyans baked their sorghum on flat pottery platters into big flat pancakes, like the teff pancakes you get at Ethiopian restaurants today.

Maybe carried by Garamantes traders, sorghum reached West Africa, probably not too long after 500 BC. The Roman writer Pliny knew what sorghum was – he thought of it as coming from India – in the 100s AD, but the Romans didn’t eat sorghum. By about 500 AD, Bantu people carried sorghum south to Tanzania and Mozambique. Other Bantu migrators brought sorghum south down the Atlantic coast to Congo and Angola, before 1400 AD.

Meanwhile, probably in India, farmers had developed a kind of sorghum that was easier to harvest, called durra. From India, durra sorghum came back to Africa, where people grew it in Ethiopia and Sudan, but not further south.

In the 700s AD, durra sorghum spread east to China and northwest all over the Islamic Empire. From North Africa it reached Europe, first in Islamic Spain, and then by the 1100s in France. Europeans called the plant “sorghum” from the Latin “Syricum granum,” the grain from Syria. Europeans brought sorghum with them to the Americas. By the late 1700s AD Benjamin Franklin wrote about using sorghum to make brooms. Fifty years later, American farmers were growing sorghum, which they called “Guinea corn” because it came from Guinea in West Africa. That was the old kind of sorghum. But soon durra sorghum took over in the United States too.

Sorghum is very similar to wheat nutritionally: mostly carbohydrate and some protein. It has more fiber and fat than wheat does, and fewer calories. People still grow a lot of sorghum today. All across southern Africa, people think of sorghum as a basic food. They eat sorghum as a porridge like oatmeal, or as bread, or cooked like polenta. And they make sorghum beer. In the United States, people grow sorghum mostly to make fuel or to feed to cattle, but because it is gluten-free more and more people in the United States are also eating sorghum.

Learn by doing: try cooking with sorghum flour
More about Sudan
And more about millet
More about donkeys

Bibliography and further reading about sorghum: