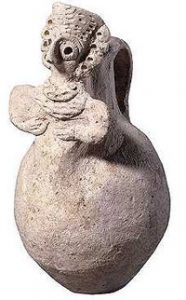 History of the Amorites: an Amorite jug, about 2200 BC

Where did the Amorites live?

About 2400 BC, the Amorites were living in what is now southern Turkey and Syria. Amorites means “westerners” in Sumerian, and that makes sense because the Amorites lived to the west of Sumer. They spoke a Semitic language, and lived partly in cities and partly as nomads.

More about the Sumerians
All our Mesopotamia/West Asia articles

Who were the Akkadians?
Babylonian Empire

But after the collapse of the Akkadians, around 1900 BC, the Amorites succeeded in invading Mesopotamia. So by about 1700 BC their descendants created the Babylonian Empire. This empire centered on their capital city of Babylon. Babylon was the same place as the old city of Akkad, the old Akkadian capital.

When the Indo-European Hittites invaded Turkey, probably the Amorites were not officially conquered, but they did come under the influence of the Hittites and learned a lot from them. Mostly, the Amorites learned how to ride horses and how to use a war chariot for fighting.

More about the Hittites
History of horses
The Yamnaya (Indo-Europeans)

The Amorites seem to have used their horses and chariots to attack Egypt, about 1700 BC. At first they probably attacked the parts of Syria that were under Egyptian control. When the Amorites won there, they continued on south along the Mediterranean coast through Lebanon and Israel into Egypt itself, where they seem to have controlled the mouth of the Nile (the area around Memphis) for a while. The Egyptians called them the Hyksos (HICK-soss), which just means the foreigners, the strangers.

The end of the Amorites

With the start of the New Kingdom in Egypt, the Egyptians forced the Hyksos/Amorites to leave Egypt. The invaders went back to their own land in Syria and southern Turkey. We don’t know very much about them after that. The Christian Bible mentions them, placing them around 1200 to 700 BC. They seem to have eventually been absorbed by the Assyrian Empire.

Did you find out what you wanted to know about the history of the Amorites? Let us know in the comments!

The Assyrians
The Hyksos invade Egypt

Bibliography and further reading about the Amorites: