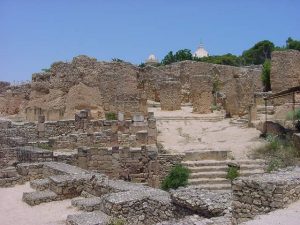 After the Second Punic War, in 202 BC, Italy was a wreck. Hannibal’s army had been marching up and down Italy wrecking things for more than ten years. All of the men had been away fighting in the war, and a lot of them had been killed, and others had decided to stay in Spain or in Africa. Not everyone wanted to go back to farming. Many men who did come back to their farms found that their farms had been ruined, or had been sold to rich men and women because they had not paid their taxes.

A lot of poor men who had lost their land, or just didn’t want to farm anymore, moved to Rome. Most of them could not find jobs in Rome, but just stayed there causing trouble and trying to get the Senate to give them food for free. Another result was that the rich people bought a lot of slaves to farm all the new land they had taken from the poor.

These two things together made it seem like a very good idea to attack Greece and West Asia at this point. Greece had helped the Carthaginians in the Second Punic War, which gave the Romans an excuse for attacking them. Fighting in Greece would give some of the poor men in Rome jobs as soldiers, and get them out of Rome. And if the Romans won, they could get lots of prisoners of war and sell them as slaves. In short, this would solve the victorious army problem.

The Romans therefore began fighting in Greece, and soon moved on to West Asia. They won everywhere they went.

Meanwhile, friends of the Romans in Africa had been hassling Carthage, which was not allowed to fight back. The Carthaginians asked Rome to help, but Rome refused. Finally, in 146 BC, although it was hopeless, the Carthaginians decided they had to fight back anyway. When the Romans heard about this they were very angry. One of the older Senators, Cato, who was old enough to remember the Second Punic War, insisted that “Carthage must be destroyed.” (in Latin, Carthago delendum est). The Romans marched on Carthage, wrecked the city, and forced all the people to move away. (You may have heard a story that the Romans plowed the city under with salt so no-one could live there, but this is a story that was only told recently, and not by the Romans or the Carthaginians).

In the same year, 146 BC, the Romans also finished taking over Greece, and destroyed the city of Corinth.

Bibliography and further reading about the Third Punic War:

Carthage, by Peter Huby (2003). A novel about the destruction of Carthage. Probably too violent for some.