Flavian dynasty: The Roman emperor Vespasian, first of the Flavians

Vespasian finally left West Asia and sailed to Rome in the spring of 70 AD. He had to wait until it was safe to travel on the Mediterranean, after the winter storms were over.

Who was Vespasian?
Year of the Four Emperors
All our ancient Rome articles

Vespasian turned out to be a pretty good emperor, though he was always more interested in the army than anything else. He especially favored the army stationed in West Asia, that he had commanded.

Vespasian was popular because he lived very simply. He didn’t throw big parties or spend a lot of money like the Julio-Claudian emperors. So the empire had a lot of money in the treasury.

Plus, Vespasian built the Colosseum – a place for ordinary people to have a good time, but also where prisoners of war and enslaved people were tortured and forced to kill each other. He built it where Nero’s Golden House had been. Vespasian was emperor for ten years, until he died in bed in 79 AD. When he died, he is supposed to have said “Oh my God, I think I’m becoming a god!”

Roman gladiators
Slavery in ancient Rome
What is an amphitheater? 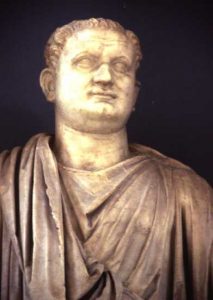 Titus and the First Jewish Revolt

When Vespasian died, his older son Titus took over. Everyone was happy to avoid another civil war. But almost immediately Titus had to deal with the volcanic eruption that buried Pompeii.

Soon Titus ran into trouble with the Senate because he fell in love with a Jewish woman named Berenice, who was a princess in West Asia, but not Roman. The Senate forced Titus to break up with Berenice.

Titus also crushed a Jewish revolt in Israel and destroyed the big Jewish temple in Jerusalem. But the Romans mostly remembered Titus as a good emperor. He died young of a fever, in 81 AD, after ruling less than three years. He was only 42 years old. 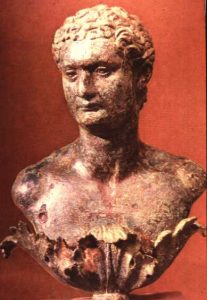 Flavian dynasty: The Roman emperor Domitian, who doesn’t seem to look so much like his dad.

Titus had no sons, so Titus’ younger brother Domitian became emperor. He built  a big stone triumphal arch to remind Romans about how Titus defeated the Jewish Revolt.

Arch of Titus
Palace of Domitian

Domitian also built a huge palace as a headquarters for all the business of the Roman Empire and made government more efficient. But Domitian had always felt that his father, Vespasian, liked Titus better, and this feeling made him angry and mean. He even tried to organize revolts against Titus when Titus was emperor.

As emperor, Domitian was convinced that everyone was plotting to kill him, and he had many senators and other people killed because he suspected them. He also may have persecuted some early Christians.

Domitian and the Christians

He also made people call him “Lord and God” (Dominus et Deus). In the end people couldn’t stand this sort of behavior, and he was really assassinated in 96 AD. (This story has something in common with the story of the Athenian tyrant Hippias, doesn’t it?)

Learn by doing: Build an arch
More about the First Jewish Revolt
More about Domitian’s palace
The Five Good Emperors

Bibliography and further reading about the Flavians:

The Emperor Domitian, by Brian Jones (1992). Makes Domitian seem like not such a bad guy. Jones also has written a biography of Titus, but it’s out of print.

Suetonius: The Flavian Emperors : A Historical Commentary, by Brian Jones and Robert Milns (2003). Academic commentary on the Roman historian Suetonius’ account of these emperors.