Who was Hippias, tyrant of Athens? 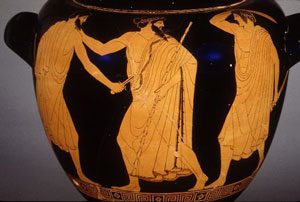 Who was Hippias? Harmodius and Aristogeiton attacking Hippias and Hipparchus

When the tyrant Pisistratus died in 528 BC, his two sons, Hippias and Hipparchus, took over ruling Athens as tyrants.

What is a tyrant?
A tyrant activity
Athens under the Tyrants
All our ancient Greece articles

Hippias seems to have taken care of most of the politics. His brother Hipparchus took care of religious matters and the gods. (We hear about this in Herodotus.)

Who was Herodotus?
Greek religion 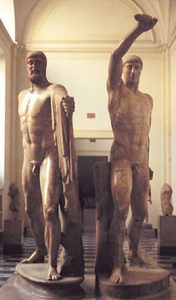 Statues of Harmodius and Aristogeiton

After his brother was killed, Hippias got more and more suspicious of everyone around him. He thought everyone was plotting against him. And they kind of were.

Four years later, in 510 BC, another rich man called Cleisthenes, from the Alcmaeonid family, did succeed in getting the Spartans to help him throw Hippias out of Athens. Hippias went to live with the Persians, where he spent the rest of his life.

Who was Cleisthenes?
The curse of the Alcmaeonids
Who were the Persians?

The Athenians thought of Harmodius and Aristogeiton as big heroes because they killed the tyrants, and brought in democracy. They put up these public statues of the “tyrannicides” – the tyrant-killers – to celebrate their achievement.

But another way of looking at these is that most tyrants – probably including Hippias – got power by promising to help ordinary people. And the leaders of Athens’ new democracy, like Cleisthenes, were other rich men. Did they help ordinary people as much as the tyrants?

Learn by doing: hold a debate: were Harmodius and Aristogeiton heroes?
More about the tyrants of Athens

Bibliography and further reading about Hippias and Hipparchus:

More about the tyrants of Athens
Ancient Greece
Quatr.us home