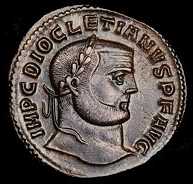 Peace for a while

Around 280 AD, the Sassanids gradually stopped attacking the Roman Empire so much. They were having civil wars of their own, and the Huns were attacking them from the north.

Who were the Sassanids?
Where did the Huns come from?
Third Century Crisis
All our ancient Rome articles

Because the Romans didn’t have to fight in the East so much, they were able to concentrate on the Germans in the North, and managed to push them back for a while. They were also able to end the revolts inside the Empire. 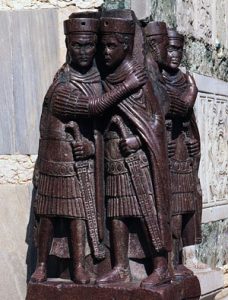 The four tetrarchs – aren’t they cute?

Diocletian and the Tetrarchy

The Romans were helped in this project by having a young, energetic, and very skilled Emperor named Diocletian. Diocletian came to power in 284 AD. Like other Emperors of this time, he was an army general.

More about the Roman army

Diocletian first pushed back the Sassanids and the Germans. Then he ended the revolts. Then he tried to solve the problem of the civil wars between the two halves of the army.

Diocletian worked out a system where there would always be two Emperors, and each of these Emperors would have two assistants. This system is called the Tetrarchy (rule of four). When one of the Emperors died, his assistant would move up to being Emperor, and choose a new assistant. 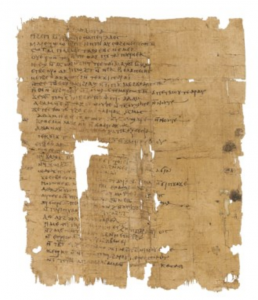 Because Diocletian believed that only patriotic unity (everybody working together) would save the Empire, he was against anybody who seemed to be different from most Romans, or different from himself.

Who were the Manichaeans?
Bahram’s persecution

One noticeable group of foreign immigrants were the Manichaeans, who had fled Bahram’s persecution in the Sassanid Empire and were refugees in the Roman Empire.

Diocletian, like Bahram, tried to force people not to follow the Manichaean religion anymore. Most Manichaeans either abandoned their faith or fled (back) to the Sassanid Empire.

Then Diocletian tried to force people not to be Christians anymore. This time it didn’t work as well – there were more Christians, and they weren’t refugees and didn’t want to move out of the Empire.

More on the persecution of the Christians

More on the Tetrarchy and later Roman Emperors (Constantine)