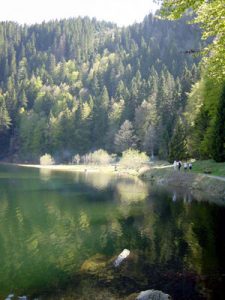 Black Forest in Northern Europe: the early European environment had a lot of forests like this one.

Not so different from Central Asia

When people first arrived in northern Europe and Scandinavia, following the Danube inland from Central Asia, they found an environment that must have already been familiar to them: a lot of forests, cold weather, and clouds. In the winter it snows, and in the fall and spring it rains. Even in the summer it sometimes rains, and the weather is hardly ever very hot.

Central Asian environment
What are clouds made of?
Why does it rain?
All our Northern Europe articles

Because there is so much water in northern Europe, trees grow there better than they do around the Mediterranean, and there are great forests.

One big forest – the Black Forest

In the ancient and medieval periods, one great forest stretched from the Atlantic coast of France all the way across Germany and Poland into Russia, with only little clearings in it here and there for people. The Black Forest in Germany is one of the little pieces of that forest left today (People called the Black Forest Black because it was so crowded with trees that it was dark). 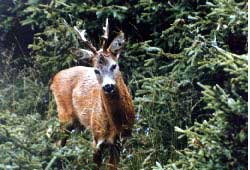 A deer in the forest: Early European environment

What kind of animals lived there?

Black Forest trees had plenty of nuts, and people there ate a lot of nuts. And there were plenty of wild animals in the Black Forest – rabbits, deer, and wild boar. And there weren’t very many people living in northern Europe, so there was plenty of room to raise cattle and pigs, and to fish in the rivers.

Wild boar and pigs
History of fishing
History of cattle
Why was salt important?

So people who lived in ancient Germany ate more meat than people in the Roman Empire. Northern Europeans sold cattle to the Greeks and Romans, and they used salt from their big salt mines to make their pigs into excellent bacon and sausage and sell that to the Romans too. 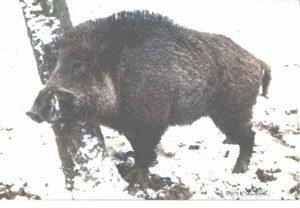 The dirt is hard to plow

The soil in the north is generally more clayey than further south, where the soil tends to be more sandy. The heavier, stickier northern soil is much harder to plow.

Soil type chart
What is a plow?
Medieval plows

So until people invented better plows in the Middle Ages, northern European farmers could only farm the lighter soils. That’s one reason that not very many people lived in northern Europe in antiquity.

Learn by doing: go for a hike in a forest
More about Northern European food
More about pigs
And more about hunting

Bibliography and further reading about the early European environment:

Europe, by Jo Ellen Moore (1999). For kids, a basic geography of modern Europe, including information about animals.

Germany in Pictures, by Jeffrey Zuehlke (2003). A basic geography of Germany for kids, with pictures. It’s about modern times, not history, but the geography’s more or less the same.

The Ancient Celts, by Patricia Calvert (2005). Covers all aspects of ancient Celtic society (in Germany and elsewhere), using archaeological evidence to show the lives of farmers, soldiers, and craftspeople.