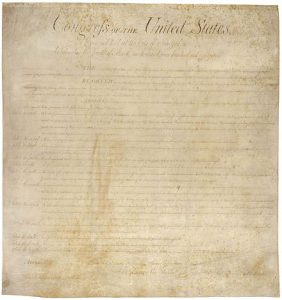 The United States Bill of Rights

How do you change the Constitution?

Over the years since the Bill of Rights in 1791, Americans have not changed their Constitution very much. It’s pretty hard to do: you have to get two-thirds of the House and the Senate to agree, and then you have to get 3/4 of the state legislatures to agree too, usually within seven years.

A simplified Constitution
What is the Bill of Rights?
All our American history articles

But there have been some changes. Some things have been changed to make the government work better. Others have been changed to give more power to ordinary people, or to people who were excluded before – people of color and women, especially. Amendments tend to come in clumps. Here’s a list of the changes – the amendments – in easier words.

13th Amendment (1865): Slavery is illegal, except that you can force people to work as punishment for a crime.

15th Amendment (1869): Men can vote regardless of skin color, even if they were enslaved before the war.

17th Amendment (1912): You vote directly for your Senators, instead of state legislatures electing the two Senators from each state.

18th Amendment (1917): Made it illegal to make or sell alcohol – whiskey, beer, wine, hard cider, etc. – anywhere in the United States. We call this Prohibition.

22nd Amendment (1951): You can only be President for two terms – 8 years (after Franklin Roosevelt got four terms).

American government in the 1900s

24th Amendment (1964): You can vote without paying any sort of tax or fee (so poor people, and especially poor black people, can vote).

25th Amendment (1967): Tells what to do if the President can’t do the job because he or she is too sick, or if something happens to the Vice President.

27th Amendment (1992): If the House or Senate votes to raise their own salaries, they don’t actually get paid more until after the next election.

Learn by doing: what is one way the Bill of Rights affects you?
More Constitutional Amendments
More about the Constitution