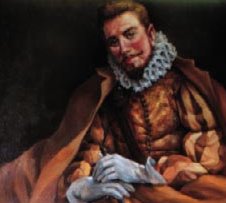 The causes of the Pueblo Revolt: Francisco Vasquez de Coronado

In 1500 AD, people of the Pueblo nation had recently left their usual land, probably because of a long drought, and moved south and west to the valley of the Rio Grande.

It was in the Rio Grande valley that they first met the Spanish invaders. Marcos de Niza, a Franciscan friar, was the first Spanish man to arrive, in 1539, and he told the Spanish king – Charles V – that he had found a very rich country.

Who was Charles V?
What’s a Franciscan friar?

So in 1540 the king sent Francisco Vasquez de Coronado, another explorer, to go check out the Pueblo nation. Coronado was angry when he found out that the Pueblo people were not as rich as de Niza had thought, but he still brought more and more Spanish settlers to live on Pueblo land.

Soon there was not enough food and water to go around, and people got less friendly to the new arrivals. The Pueblo army tried to throw the Spanish out and make them go home, but in a battle with Coronado the Pueblo army lost, and many people were killed. So the Pueblo people had to put up with more and more Spanish people moving into their land.

What did Pueblo people eat?

A Cheyenne man named Yellow Horse captures a herd of mules (about 1870). After the Pueblo Revolt, many Native people got horses and donkeys.

In 1598, Juan de Onate set up the capital of the Spanish government in North America at Santa Fe (SAN-ta-FAY in modern New Mexico). He also began to encourage people to convert to Christianity. Many people decided to try out this new religion whose people were so powerful, and others were forced to convert by the Spanish soldiers. By 1630, 60,000 people had become Christians.

But the Spanish invaders were treating people worse and worse, even if they became Christians. So in 1680 the Pueblo army under their leader Popay fought another war to get the Spanish out of their land. This time they won, and in 1684 the Spanish people had to leave Santa Fe and retreat to El Paso.

The Pueblo people kept all the horses and donkeys, and this was how Native Americans came to have horses – the free Pueblo people bred horses and sold them to their neighbors like the Kiowa and the Comanche and the Cheyenne, and these people in turn sold horses to other native people.

Where did horses come from?
Donkeys are from Africa
Horses come to the Americas
More about the Comanche 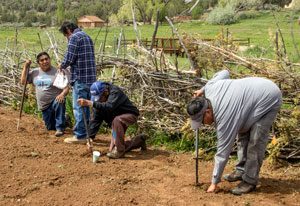 The Spanish come back

Two years later, more Spanish soldiers came, and under their leader De Vargas they were able to reconquer the Pueblo people in New Mexico. But the western Pueblo people, including the Hopi, remained free (in modern Arizona).

The railroad on Pueblo land

Because of this revolt, and because it was hard for Spanish settlers to cross the desert of Arizona and New Mexico, Pueblo people remained mainly independent until the end of the 1800s. But in the 1880s Europeans built a railroad that went through Pueblo land, and then lots of European settlers came to live there.

Bibliography and further reading about the Pueblo revolt and Pueblo history:

Looking for a second source about Pueblo people? Check out this article from Crow Canyon!