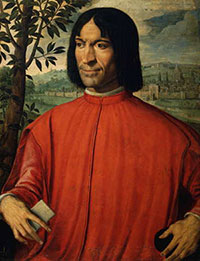 In the early 1400s AD, a few rich families ruled the city-state of Florence in northern Italy. With the Holy Roman Empire very weak, these families ran Florence as an independent country. But most people in Florence had lost the political power they used to have, and they were angry about it. The Medici family, who owned a successful bank, became these people’s unofficial leaders in much the same way as the ancient Greek tyrants. Rich citizens still held elections for the City Council, but they always elected whomever the Medici family said they should vote for. First Cosimo de’ Medici, then his grandson Lorenzo de’ Medici ran the city of Florence. The Medici became rich enough to support many great artists and scholars like Donatello, Leonardo da Vinci and Michelangelo. The Medici also paid to finish building the giant dome of Florence’s big cathedral, the Duomo. 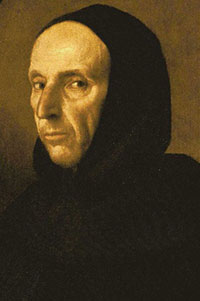 Savonarola, who led a rebellion against the Medici

When Lorenzo de’ Medici died in 1492, though, people turned to a more radical leader, a Christian Dominican monk called Savonarola, who preached about how bad rich people were (Compare this to how the radical Athenian democracy followed the tyrants there). Savonarola convinced people to throw the Medici family out of town. Savonarola convinced the people of Florence to burn their fancy clothes and their books so they could go to Heaven. 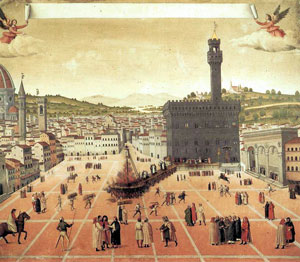 The execution of Savonarola

But he didn’t do such a good job of running the city, and the Pope excommunicated him. By 1498 the Medici were back in power, and they killed Savonarola. One of their employees was the young Machiavelli.

More about Machiavelli
The Renaissance