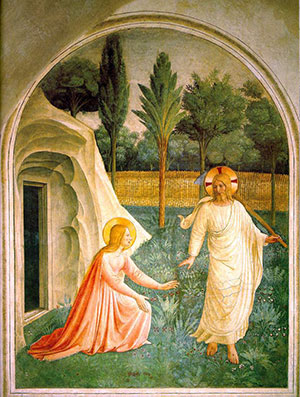 Who was Fra Angelico?

Fra Angelico was born about 1395 AD in a small town in northern Italy. Like his older brother, he learned to paint when he was growing up. When he was about 20 years old he became a Christian Dominican monk (like Thomas Aquinas before him).

What is a monk?
An earlier artist: Giotto
Late Medieval Italy
All our medieval Europe articles

What does “Fra” mean?

We call him “Fra” because that is short for “Frater”, the Latin word for “brother”. That is what monks called each other. But even after he was a monk, Fra Angelico kept on painting frescos.

What is a fresco?
Painting your own fresco

Fra Angelico was born about fifty years after Giotto died. He continued Giotto’s project of placing Christian religious people like Jesus and Mary into realistic scenery and clothing.

He shows Jesus as a normal person

As a Dominican, he had taken vows of poverty, and his paintings show Jesus and the disciples as ordinary, poor people, without the gold backgrounds and rich jewels of Cimabue‘s generation. In these new paintings, Jesus’ disciples sit on the ground and talk. 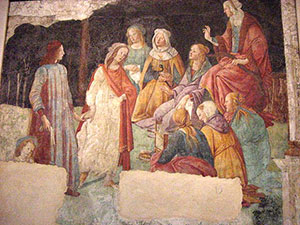 Jesus talks to the apostles

In 1436 AD, he moved to a new friary in Florence, where he met many other artists and saw the work of Giotto‘s student Masaccio.

In Florence, he began working to improve his use of perspective – making his fresco paintings look more three-dimensional. His paintings also used clear, cheerful pastel colors that stand out from the darker colors most medieval painters used.

Was he a successful painter?

Fra Angelico was famous and successful as a painter all through his life, and painted many pictures not only in Florence but also for the Popes in Rome. He died in Rome in 1455, when he was about sixty years old. Leonardo da Vinci and Perugino were toddlers. Michelangelo was born twenty years later.

Learn by doing: try to draw with perspective
More about medieval Florence
Go on to Michelangelo