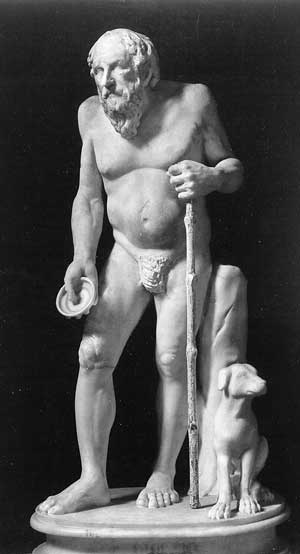 Diogenes the Cynic with his lamp (Roman sculpture, once in the Villa Albani) – the Cynics

One of Socrates’ students, Antisthenes, started his own group of philosophers called the Cynics in the late 400s BC. He argued – like Buddhists in India a little earlier – that a simple life without possessions was the path to happiness.

Who was Socrates?
Greek philosophy
Buddhism in India
All our ancient Greece articles

Who was Diogenes the Cynic?

Antisthenes’ most famous successor is Diogenes the Cynic, in the 300s BC, who rejected everything about civilization and culture, as well as money and stuff.

Hellenistic Greece
History of money
World history at this time

What did Diogenes think?

People tell a lot of stories about Diogenes – supposedly he lived in a wooden barrel and ate raw meat. Diogenes thought people should try to be self-sufficient (not depend on other people), austere (not own stuff), and shameless (not caring what other people thought of them). Today, he might be a libertarian, or he might be a punk.

One story tells how Alexander of Macedon went to see Diogenes in Athens. Alexander said, “Oh, Diogenes, I want to honor your wisdom. Tell me, what can I do to help you? I am incredibly rich and powerful, and I’d like to help.” Diogenes answered “You can get out of the way – your shadow is blocking the sunlight I was enjoying.”

Diogenes and the lamp

In another story about Diogenes, he started carrying an oil lamp with him everywhere and holding it up as if he was looking for something. When people asked him what he was looking for, he would say, “For an honest man.” Diogenes came across as pretty obnoxious to people he talked to!

In the late 300s BC, a lot of Athenian philosophers were Cynics. Some, like Crates of Thebes and his wife Hipparchia, lived as unhoused people on the streets of Athens. One of Crates’ students was Zeno, who started his own philosophical group, called the Stoics. Most of the Cynics then became Stoics.

Zeno and the Stoics

But in the 100s AD, in the time of the Roman Empire, many Roman philosophers turned back to Cynicism. Right up to the fall of Rome there were Cynics all over the Roman Empire, sleeping on street corners, eating scraps, and rejecting society.

Other Romans generally admired Cynics’ ideals but still thought that individual Cynics were gross – dirty and smelly. Becoming a Cynic was a sort of acceptable form of social protest first against Alexander, and then against the Roman emperors – against living under someone else’s power with no real political voice.

There are some similarities between early Christian philosophy and the Cynics. Early Christians also rejected owning property, and participating in Roman government.

Our word “cynic” comes from the Cynic philosophy, and it means someone who thinks everyone is selfish and out for themselves, as the Cynics kind of were.

Learn by doing: do you care too much what other people think of you?

Bibliography and further reading about the Cynics: