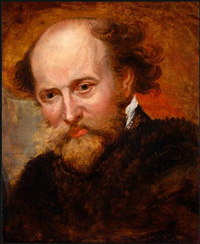 Peter Paul Rubens was born in Germany in 1577. At that time, the Holy Roman Emperors were weak and there were a bunch of civil wars going on. His father, who was a lawyer, was also a Calvinist – a Protestant. The family fled to Cologne before Rubens was born, because of fighting between Catholics and Protestants. But Rubens’ father died at 57 when Rubens was ten years old. Then Rubens’ mother raised him to be a Catholic after all.

Rubens’ mother moved to Antwerp (now in Belgium) when he was twelve, and he went to school there for a couple of years. But by the time he was 14 she apprenticed him to a local painter. When Rubens was 21 he finished his apprenticeship and joined the painters’ guild as a full member. 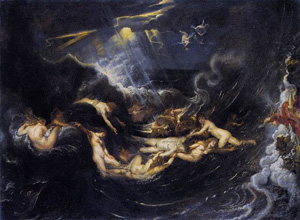 Rubens was one of the last painters who painted on wood panels, but he also painted on the new material: hemp canvas. More than anyone before him, Rubens experimented with loose, flowing brush-strokes that gave the feeling of the scene rather than concentrating on details. As a Catholic, he participated in the Counter-Reformation, and painted a lot of altar-pieces for Catholic churches, but Rubens also painted a lot of scenes from Greek mythology. 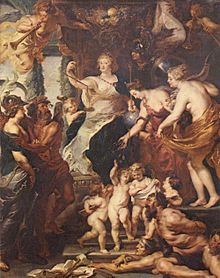 The Happy Regency of Marie de Medici, by Rubens

Rubens soon became known both as a great painter and as a diplomat (and a spy), and he spent the rest of his life both painting (mostly in Antwerp) and travelling all over Europe on the business of first one ruler and then another. He worked with Marie de Medici and Anne of Austria, Philip IV of Spain and Charles I of England. Rubens became very well-off. He had two wives (the second one forty years younger than he was) and eight children, and he died of heart failure in 1640, when he was 63 years old.

Learn by doing: copy one of Rubens’s paintings
More about the Renaissance

Bibliography and further reading about Rubens: