Who was Eratosthenes? Astronomy and math 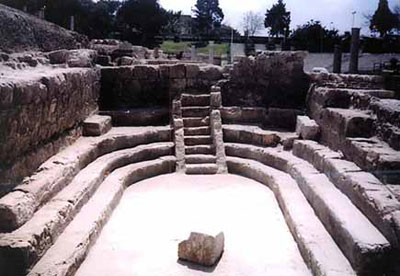 Eratosthenes of Cyrene went to school here! A classroom at the University of Alexandria (al-Ahram 2004).

Who was Eratosthenes of Cyrene?

Eratosthenes of Cyrene was born about 276 BC. He was born in Cyrene (modern Libya), in North Africa.

When he was still young he moved to Alexandria, in Egypt. That way he could study mathematics and astronomy at the University of Alexandria. You can see one of the classrooms in the picture!

Then in 236 BC, when he was forty years old, Eratosthenes of Cyrene became the chief librarian at the great library of Alexandria. Eratosthenes spent the rest of his life in Alexandria. He studied at the library. He helped other scientists with their projects too.

Eratosthenes got to know other scientists

Many other scholars also worked at Alexandria’s big university and library. Eratosthenes had the chance to get to know them. He seems to have known both Aristarchus and Archimedes. They were Greek astronomers who came to Alexandria, just like he did, to study mathematics and astronomy.

More about Aristarchus
Who was Archimedes?
Ancient Greek astronomy
History of astronomy

Eratosthenes and the circumference of the earth

Erathosthenes was able to add a fairly accurate calculation of the circumference of the earth – how big around the earth was at the equator. He did his calculations using the angle of the sun at noon on the summer solstice – the longest day of the year – in two different locations.

How far away are the sun and the moon?

Erastosthenes also correctly calculated the distance from the earth to the sun and the moon.

Eratosthenes also drew an early map of the world. To help him in this project, he invented the idea of latitude and longitude.

The Mediterranean Sea and Europe

He had a pretty good idea of what the Mediterranean looked like. And he made sure to include Libya (where he was born). But there’s a lot Eratosthenes doesn’t seem to know about what the world looks like. So England (Britain) is much too big, and so is Ireland.

Scandinavia hardly exists at all. He doesn’t know about most of the Atlantic side of Africa, or South Africa.

Eratosthenes didn’t understand how big Central Asia was. He knew Ethiopia, the Scythians, and the Arabian peninsula.

India, China, and the Americas

He knew a little about India and Sri Lanka. But he doesn’t seem to have heard of China. Eratosthenes didn’t know about the Americas or Australia either.

Learn by doing: the earth-sun-moon dance
More about the Egyptian astronomer Ptolemy

Bibliography and further reading about Eratosthenes: