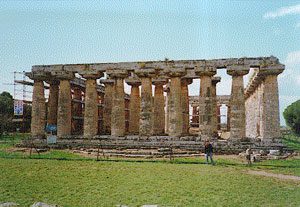 Once they had established their Republic,  the Romans began to conquer southern Italy. They used another good idea to help them.

Like Alexander the Great about the same time, Romans told everybody that if any city needed help fighting a war, the Romans would be happy to help them. Soon a city did ask for help, when its neighbors were attacking it. The Romans sent soldiers and fought off the neighbors.

Alexander the Great
The Roman army

Leaving Roman soldiers in the city

But when the war was over, the Romans announced that they were going to leave Roman soldiers in this city, to keep the city safe. But when there are Roman soldiers living in the middle of your city, you pretty much have to do whatever the Roman Senate says!

On the other hand, the Romans also copied the Persians and Alexander by including the conquered cities as Romans, so they would come to feel that they were Romans themselves. That’s how the Romans took over all of southern Italy.

The Persian Empire
Republican temples
Roman art in the Republic
What is a forum?

Each time the Romans conquered a new place, the Roman general in charge would put up a little temple in Rome so people would remember how great he was. And the Romans built temples and forums in the cities they conquered, too.

Eventually people realized that the Romans meant to conquer all of Italy! Some of the Greek cities in southern Italy asked for help from Pyrrhus (PIRR-us), the king of Epirus (eh-PEER-us), who was also Greek. They wanted Pyrrhus to save them from being part of the Roman Empire.

Pyrrhus thought he would be like Alexander the Great and conquer the world, so he came with many men and elephants (the elephants came from India). But the Romans beat Pyrrhus too.

Bibliography and further reading about the Roman Republic: