Christianity in the 200s AD – History of religion 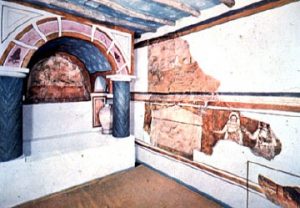 During the forty years between 261 AD and 303 AD, the Roman government did not officially persecute the Christians.

The emperors were busy with the worst of the Crisis of the Third Century. Maybe they were following the example of the great Sassanian ruler Shapur, to their east, who tolerated all religions. Roman mobs still sometimes lynched Christians, but the Roman government did not officially encourage this sort of thing.

Shapur and the Sassanians
Crisis of the Third Century

Because of this peace, the Christians could start to build a church organization. They started to build churches, instead of meeting in people’s houses. Christians even built a church right across the street from the Emperor’s palace in Split (modern Croatia)!

Christians and traditional philosophers started to take each other more seriously, and argued with each other about who was right. 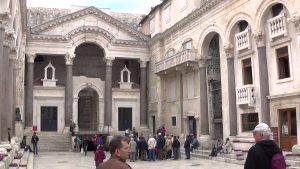 But some Christians also used this time to fight with each other. Places like Carthage where there had been a big persecution were usually the places where fights broke out.

These people said that Christians who had gone to jail or been tortured were martyrs and that God had given the martyrs special powers. There was a lot of arguing about who was a good Christian.

But this is also a time when being a Christian started to be a way to get power in the Roman Empire. More and more, the young radical men and women who had been the first Christians got pushed aside. Older, richer men wanted to become bishops now.

What is a bishop?
Who is St. Nicholas?

They became Christians, but they weren’t about revolution. These new Christians – like St. Nicholas – were more conservative. They wanted people to obey their priest and their bishop. They thought people should pay taxes so bishops could live in nice houses and build churches. And they wanted women to keep quiet. Mostly, these new bishops won.