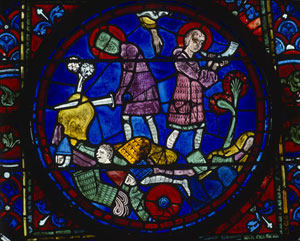 As soon as the Moors had conquered Spain in 711 AD, the descendants of the Visigoths and the Romans joined forces to try to get the Moors out of Spain again. These Spanish people gradually conquered more and more of Spain, beginning in southern France and fighting little by little across the Pyrenees and further south. We call this the “Reconquista” or “Reconquering”. For these early raiders, a strong motive was to capture some of the high-quality Indian steel swords that the Islamic soldiers used.

One famous story about the Reconquista is the Song of Roland. Roland (according to the story) was a soldier in Charlemagne‘s army fighting in Spain about 800 AD who was ambushed by Moors (perhaps really the Basques) and died tragically, fighting to the death. When he realized he was going to lose, he tried to break his Indian steel sword on a rock to keep the Moors from getting it, as you can see in the picture

After 1100 the Spanish people were helped by a lot of French soldiers who went to fight in the Reconquest (as it was called) once France became peaceful enough that the French soldiers were not needed there anymore. Still they did not get very far against the Almohads who ruled Spain, until rebellions and civil war weakened the Almohad kingdom. 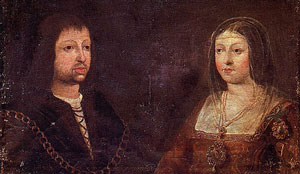 Once the Almohads were weaker, the Spanish army was able to beat them pretty quickly. So most of the Reconquista really happened in the early 1200s AD. The Christians took Toledo in 1212, then Cordoba in 1236, and by about 1250 the Moors only held the city of Granada in the very southernmost part of Spain. In 1492 King Ferdinand and Queen Isabella finally succeeded in reconquering all of Spain and Portugal.

Most of the remaining Moors and Jews fled to North Africa, where many of them settled in Tunisia. Other Jews fled to Greece and Istanbul, where the Ottoman sultans welcomed them. Meanwhile, as the Spanish kings found themselves with large, well-trained armies and nobody left to fight, they began in the 1400s to explore down the coast of West Africa, looking for cheaper slaves and gold. In 1492, Christopher Columbus reached the Caribbean islands off the coast of the Americas, where he immediately began killed the Arawak who lived there. Then in 1498 Vasco da Gama sailed around Africa and reached the Pandya empire in India.

Go on to Renaissance Spain

Bibliography and further reading about the Reconquest: