Knights of the Round Table – Medieval England 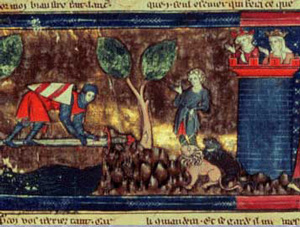 Lancelot to the rescue! Notice the importance of his strong steel sword. (Knights of the Round Table)

In the early Middle Ages, poets and story-tellers were telling a lot of different stories about knights and ladies and their adventures. But how did all these stories fit together? People wanted all of these stories to be tied together somehow. So the poets came up with the idea of the Knights of the Round Table.

It’s a framing story, like the framing story in the earlier Odyssey, the Mahabharata, or the (later) Arabian Nights. A poet named Wace wrote the earliest written description of the Round Table, about 1150 AD. Wace was a Norman, who went to school at Caen, in France, and eventually probably became a Christian monk.

The Romanesque Abbaye aux Hommes, in Caen (about 1050 AD)

The Odyssey
The Mahabharata
The Arabian Nights 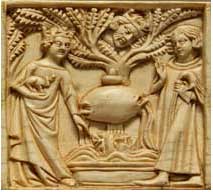 Tristan and Isolde, and the king spying on them from the tree (French ivory carving, 1200s AD)

Why was it a round table?

The table was at the court of King Arthur, and it was round so that all his knights could sit at it without anyone seeming more important than anybody else: they would all be equal to each other (though not to women, or peasants, who couldn’t even sit at the table). It’s still interesting to see so much interest in supporting equality in the Middle Ages.

Who was Lancelot?
Tristan and Isolde
Arthur and Morgaine
Mordred, that’s quite a name?

Some of the most famous knights were Sir Kay, Sir Gawain, Sir Lancelot, Sir Tristan, and Sir Mordred. You can read some of their stories by clicking on the links here.