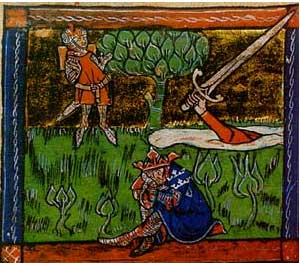 King Arthur and the Lady of the Lake

Morgaine, or Morgan, first appears in written stories about 1150 AD. There are different stories about her, but most of them agree that Morgaine was a famous healer, like Isolde, and that she was evil, or at least sometimes evil.

In some versions, Morgaine was King Arthur’s older sister. She grew up in a Christian convent, and then married King Uriens when she was about thirteen years old. King Arthur gave Morgaine the magic scabbard of the sword Excalibur for safekeeping, but instead Morgaine gave it to a man she liked, Accolon. Then Morgaine set up a complicated plan to trick Arthur into fighting Accolon, thinking he had the magic scabbard, when it was really Accolon who had it. Then when Arthur was killed, Morgaine would kill her husband King Uriens too and become queen herself.

But with the help of Nimue, the Lady of the Lake, who gave him a sword, Arthur actually won the battle anyway. Morgaine agreed to leave Camelot forever. Even from exile she tried to kill Arthur by sending him a poisoned cloak, and again Nimue saved him. But one day when King Arthur was out hunting, he ran into Morgaine by accident, and they became friendly again. When Arthur was wounded in his battle with Mordred, Morgaine and Nimue took him to the Island of Avalon to heal his wounds.

Tristan and Isolde
Knights of the Round Table
Lancelot and Guinevere
Arthur and Mordred
Medieval literature
Quatr.us home