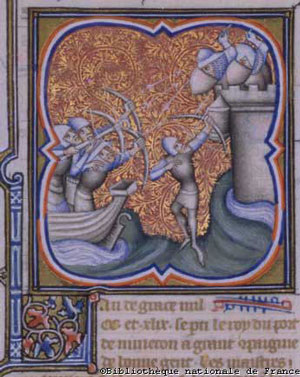 The siege of Damietta: Fifth Crusade

In 1216 AD, Pope Honorius III succeeded in getting some more Europeans to agree to try again to conquer Jerusalem from the Ayyubids.

The Fourth Crusade
Who were the Ayyubids?
Islamic Empire articles
All Medieval Europe articles

Who led the Fifth Crusade?

This time, the Pope would be in charge instead of European kings. Frederick II of the Holy Roman Empire wanted to come along. (He was very interested in Islamic culture. He started the University of Naples and built a zoo there.)  But the Pope said no, this crusade was for the Pope, not for kings. Some Hungarian troops went along.

Late medieval Hungary
Who is the Pope?
More about Frederick II

An alliance with the Seljuk Turks 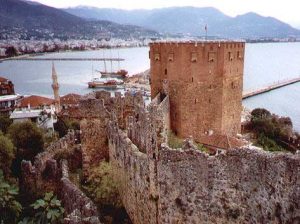 The Crusade went south to Egypt. They were following the original plan of the Fourth Crusade. In 1218, the Crusaders made an alliance with the Seljuk sultan Kay Kaus I against the Ayyubids. (Kay Kaus may have thought of the Crusaders more as paid mercenaries. The Normans had often fought as mercenaries in the Mediterranean.) The allies attacked the port of Damietta in Egypt.

The Seljuk Turks
What is a mercenary?
Dysentery and death

There was a long siege, in which many people on both sides died of disease. In 1219, the Crusaders did finally manage to capture Damietta, but then they immediately began to fight among themselves over who would be in charge there.

The end of the Fifth Crusade

In 1221, the Crusaders marched towards Cairo, to try to take over more of Egypt, but the Ayyubids just used the Nile River to flood all the roads, trapping the Crusaders. The Crusaders had to make peace in order to get out. They gave Damietta back to the Ayyubids and went home. Soon Frederick II decided to have his own Sixth Crusade.

Learn by doing: take a sailboat ride
The Sixth Crusade
More about the Ayyubids