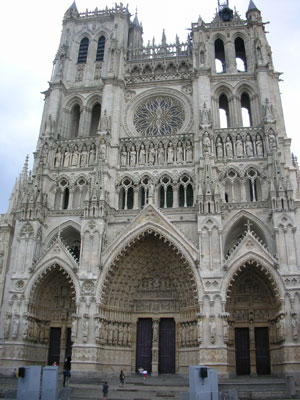 Façade of Amiens cathedral in France

Why did Amiens build a big cathedral?

Amiens is not far from Reims, in northern France, and when the bishop of Reims began building a big new cathedral in 1211 AD, naturally the bishop of Amiens wanted one too. In fact, Bishop Evrard of Amiens was determined to have the biggest cathedral in France, so he built his nave 138 feet high – 13 feet higher than Reims, and almost as high as the dome of the Pantheon in Rome.

Reims cathedral
What is a cathedral?
All our medieval Europe articles

How could they afford it?

Warmer weather had made northern France easier to grow food in, and so it got richer.

Then armies from the north of France conquered the south of France. (They captured the fortress of Carcassonne in 1209.)

A history of Carcassonne

The wealth flowing north from the newly conquered south paid for the big cathedrals, and the cathedrals were like big banners showing how powerful the north was.

The front of Amiens cathedral

The builders began with the front, or facade, of the cathedral. Like Notre Dame of Paris a generation earlier, the facade of Amiens has three big doors on the bottom level, a gallery and a row of statues across the middle, and a huge rose window (a round window 43 feet in diameter).

But the facade of Amiens cathedral emphasizes vertical lines more than the earlier Notre-Dame of Paris, which has stronger horizontal lines. Amiens’ facade is also deeper, so there are more contrasts between light and shadow. 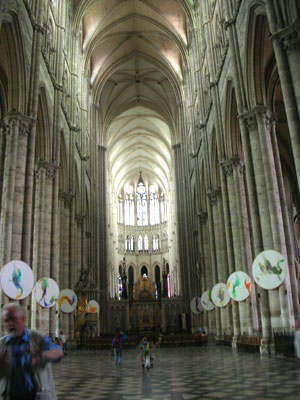 Inside the cathedral, there’s the same four-part groin vaulted roof as at Chartres, Rouen, and Reims, supported by the same kind of flying buttresses on the outside.

The parts of a church

Because the nave at Amiens is very narrow, it seems even higher than it really is. The side aisles are also very high, which adds to the effect.

Learn by doing: build an arch
More about Amiens cathedral