What is a meteor?

Meteors or meteorites are bits of rock (like granite) and ice – usually a mixture of rock and iron and nickel but sometimes just rock or just iron – from out in space that get sucked into the gravity of the Earth and fall through our atmosphere to the ground.

What is granite?
Where does iron come from?
How does ice form?
What is gravity?
What is the atmosphere?
All our space articles

Where do meteors come from?

Usually meteors fall to Earth when a comet has passed close enough to the Earth for Earth’s gravity to grab some of its material. A meteor is the same thing as a shooting star or a falling star – they’re not really falling stars, but some people call them that.

What is a comet?
When did the Earth form?
What are stars made of? 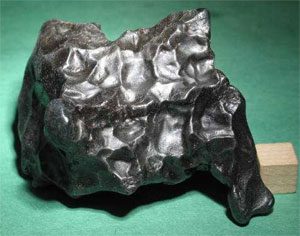 Meteors look like stars as they fall because when they hit Earth’s atmosphere the friction of the rock rubbing against the atmosphere causes heat and light, like a fire. This heat melts all the ice off the meteor. If the whole meteor burns up in the atmosphere, then it is gone. If a piece of it survives to hit the Earth, then we call that a meteorite.

What is friction?
What is heat?
Photons and light

How big are meteors?

Most meteorites are tiny, the size of pebbles, and most of them fall into the ocean, because more of the Earth is ocean than there is land. Even if they fall on land, these tiny meteorites don’t do any harm. Sometimes, though, much larger meteorites do fall to Earth.

The meteor that killed the dinosaurs

One really huge meteorite, about eight miles across, smashed into the Earth about 65 million years ago, where it made a huge crater and sent thousands of tons of dust up into the air. Because of this meteorite, Earth got much cooler for a while, and most of the dinosaurs died.

More about dinosaurs
The Cretaceous period

Learn by doing – a project with meteors
More about space

Bibliography and further reading about meteors: