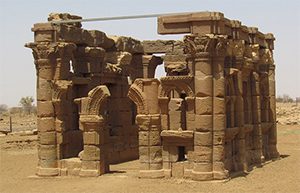 In the first centuries AD, African architects kept building more stone buildings, as trade continued to increase, and Africa kept on getting richer. In East Africa, the queens of Kush (in modern Sudan) built stone temples and palaces. 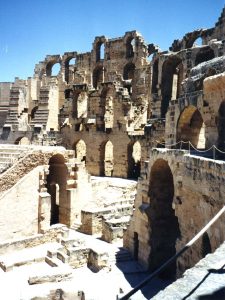 The amphitheater of El Djem, in southern Tunisia (150 AD)

North Africa and the Roman Empire

Being part of the Roman Empire made North Africa much richer than it had been before, and between 100 BC and 400 AD people built many stone buildings all over North Africa, from Egypt to Morocco. About 100 AD, they built the great amphitheater at El Djem (modern Tunisia), one of the largest amphitheaters in the Roman Empire. They built a great city at Lepcis Magna (modern Libya) with triumphal arches, a forum, and many stone houses with mosaic floors and marble decorating the walls. 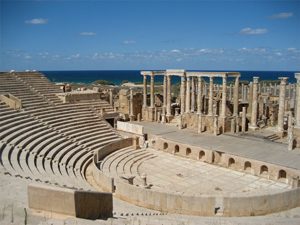 Near the Atlantic coast in Morocco, Volubilis – the capital of Juba and Cleopatra Selene – grew bigger and gained a stone city wall, a sewage system, stone temples, an aqueduct and public baths, and a basilica, as well as many fine houses. It may have housed about 20,000 people. 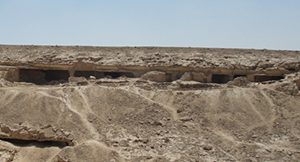 Further east in Egypt, people also built many new stone temples, houses, theaters and all sorts of buildings. By the 300s AD, newly Christian monks and nuns re-created India’s rock-cut Buddhist monasteries in Egypt’s desert on either side of the Nile River. In and around Carthage, Christian congregations adapted Roman basilicas into some of the earliest Christian churches.

Learn by doing: build a model of an amphitheater
More about African Architecture – the Middle Ages