Who was Hestia? Ancient Greek gods 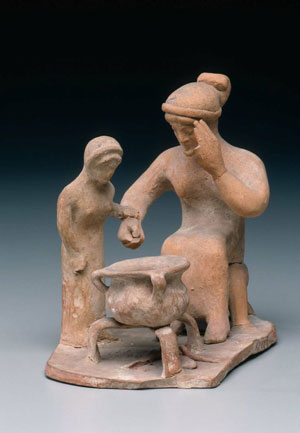 Hestia, home, and the hearth: A woman and a girl cooking

Hestia doesn’t appear in stories much. We have almost no images of her, either. She is one of the daughters of Rhea and Kronos, and so she is the sister of Hera and Demeter.

And so of course Zeus, Poseidon, and Hades are Hestia’s brothers. Hestia never marries and has no children.

Hestia is the Greek god of the house, and especially of the hearth (fireplace) within the house, so she is the god of safety, security, doing your duty, taking care of things.

The Greek house
Greek and Roman houses
History of houses

Probably even though she is not in very many stories, she was actually a pretty important god. People worshipped her at home. She was part of the ritual of lighting a fire or moving into a new house, or getting married. The Romans had a similar god called Vesta (it’s the same word really). They didn’t make pictures of her, either. The Vestal Virgins were her main priestesses in Rome.

Bibliography and further reading about Hestia: