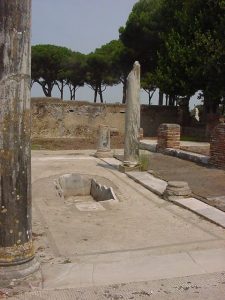 A peristyle of a Roman house at Ostia – 200s AD

In classical Athens around 500 BC, and throughout the Greek world, people built courtyard houses, like earlier ones in Egypt and West Asia, although in a particular Greek form known as the “peristyle house.” Peristyle houses had a smaller courtyard, which usually had a garden in it, and a shady porch or portico all around the garden, and rooms around that. Usually the far end of the peristyle had one big room, that was the dining room. 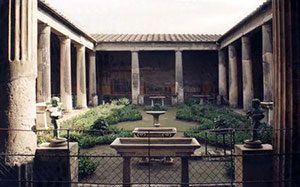 But when the Romans conquered southern Italy from the Greeks, around 275 BC, the atrium house met up with the Greek peristyle house. People started to build larger houses that combined the two styles, the “atrium-peristyle house.” There would be an atrium in the front, near the street, and a peristyle in the back.

Throughout the Roman Empire, most of the fancier houses in Europe and around the Mediterranean were atrium-peristyle houses. Simpler houses kept on being hearth houses further north, in Europe, and courtyard houses further south, around the Mediterranean. However, with cities getting bigger, more people began to live in apartments instead of houses. Some of these were rooms over or in back of shops, where probably the shopowner or the slave who ran the shop lived with his or her family. There were also big apartment blocks, called insulae (IN-sue-lie). These were often built of brick, and were up to five or six stories high. They often had courtyards to let some light in to inside rooms.

But with the collapse of the Roman Empire in the West, around 400 AD, most people became poorer, and the old hearth house and courtyard house became more common again. Rich lords and ladies and their servants and followers began to live in castles, with moats and walls and towers. In the East, palaces continued to be larger versions of courtyard houses, with many courtyards.