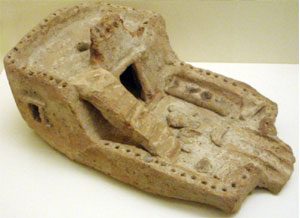 Most Egyptian people lived in small houses like this one. The house was built out of mudbrick, with wooden beams holding up the flat mud roof. Our word “adobe” for mudbrick comes from the ancient Egyptian word, “dbe”, with the Arabic “al” added at the beginning.

In hot weather (which was almost all the time), people slept on their roof, and worked up there, to catch the breeze. You can see the mud-brick staircase going up to the roof (though some people just used wooden ladders).

Underneath the house had one room. The whole family lived in one room. It was dark and stuffy, and people mostly just kept their things in there, the way you do with your tent when you go camping. They didn’t spend much time inside the room. But during the hot part of the day, they would nap in their room, out of the sunlight.

Inside the room, there wasn’t much furniture either. There were woven mats made of straw as carpets on the dirt or clay floor. Sometimes there were small wooden stools, or a wooden bed with string pulled across it. 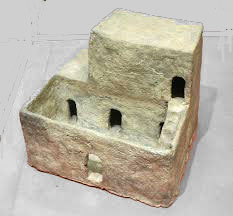 This house has more than one room (Louvre Museum, Paris)

In front of the room, there was a courtyard. The courtyard would have had a high wall around it – the wall is missing in this model, but you can see the holes where it was attached. In the courtyard, people cooked food over clay braziers, ate dinner, spun flax into linen, and did many other things. People’s goats and chickens also lived in the courtyard.

Egyptian houses didn’t have bathrooms. Sometimes people just left the house and went to the edge of the village when they had to go. Sometimes they used a chamber pot inside their house, and then emptied it later outside the house. Some people had an outhouse built into a corner of their courtyard. There wasn’t any water inside the house either. People sent their kids or slaves to the village well to draw up buckets of water and bring them back to the house for baths or for drinking or cooking. (Kids and slaves both hated this job!)

Not everyone had a nice house like this to themselves though. A lot of people lived in a house where there were several rooms around one courtyard, and they had to share the courtyard with other families. Often there were fights. Sometimes people even shared their one room with another family.

Learn by doing: Drawing the afterlife
More about Egyptian furniture