Who was the African god Bes?

Beginning about 2500 BC, near the end of the Old Kingdom period in Egypt, people started worshipping a new god, Bes. Nobody knows for sure where Bes came from, but he may have started out as a Nubian god, from south of Egypt in what’s now Sudan.

People in southern Egypt (Upper Egypt) worshipped Bes long before people did in Lower Egypt (in the north). The word “besa” means “cat” in Nubian, and maybe Bes originally looked like a lion standing on his hind legs.

A god of protection

People didn’t worship Bes in temples, but by the New Kingdom (about 1500 BC) many Egyptian families kept a statue of Bes in their house.

Bes was so ugly that he could frighten evil spirits, so people kept him by the door (like we put pumpkins by our doors on Halloween). He was apotropaic. Bes also protected pregnant women and women having children from evil spirits, so he was also a god of childbirth. Egyptian dancers and musicians sometimes got tattoos of Bes on their legs. 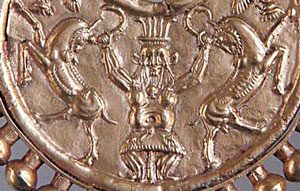 People kept on worshipping the god Bes all through the time of ancient Egypt. With Egyptian colonization of Phoenicia, people also started to worship Bes outside of Egypt.

Who were the Phoenicians?
The Sogdians in Central Asia

Then Phoenician settlers brought Bes to Spain and North Africa. When the Persian Empire conquered Egypt in the 500s BC, Persians spread the worship of Bes as far east as Afghanistan and Pakistan, too.

Christianity and Islam: the end of Bes

People kept worshipping Bes through most of the time that the Roman Empire ruled Egypt too, right up to the 300s AD. But when most Roman people became Christians, and most Iranians became Buddhists or Christians, they stopped worshipping Bes.

Bibliography and further reading about the Egyptian god Bes:

Religion in Ancient Egypt: Gods, Myths, and Personal Practice, by John Baines, David Silverman, and Leonard Lesko (1991). Pretty hard going, but it will tell you everything you need to know about Egyptian gods.