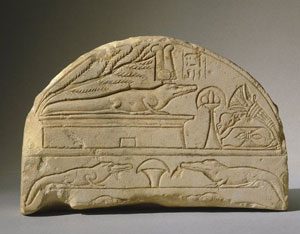 What kind of animals lived in ancient Egypt?

Mostly, the same kinds of animals lived in ancient Egypt as in other parts of Africa. Wild animals included crocodiles, who lived in the Nile River water (and there are still lots of crocodiles in the Nile today, too!).

There were lots of water birds like herons and cranes and ibises who lived along the banks of the Nile (and still do today). 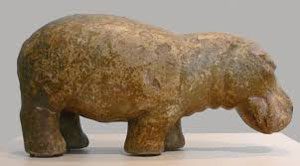 Hippopotamus statue from the New Kingdom

People were most afraid of the hippopotamus, which was a fierce animal that lived in the river. Hippos look cute when you see them at the zoo, but they kill many people every year even today.

When did people start eating eggs?

Hippos mainly lived south of the Sahara Desert, but they also came down the Nile River valley to live in Egypt. Less scary creatures also lived along the Nile river: frogs and lizards and fish, and many ducks and geese. 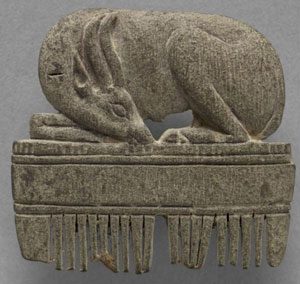 A carving of a gazelle on a hair comb (1300s BC, now in the Cleveland Museum of Art) – Egyptian animals

On the land, away from the river, Egypt had a lot of wild gazelles. People hunted these gazelles with dogs and bows and arrows. They ate gazelles for food.

As that mention of dogs suggests, people who lived in ancient Egypt had tame (domesticated) animals as well. The first animals they had were probably dogs.

Where did dogs come from?
Donkeys and Sudan

By around 4000 BC, Egyptians got domesticated donkeys from their neighbors to the south in Sudan. Donkeys were very useful to carry things and helped Egyptians do a lot more trading with Sudan and also with West Asia. 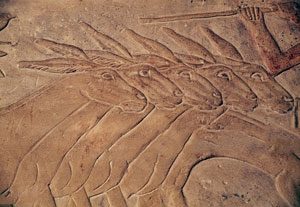 Domestication of cattle
Where do pigs come from?
How about sheep?
Horses and the Hyksos

In the Second Intermediate Period, about 1600 BC, the first horses came to Egypt from Central Asia. 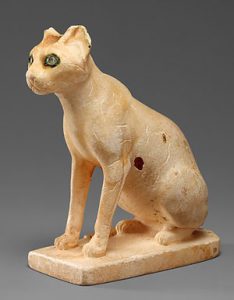 Most famously, families in ancient Egypt kept a lot of cats as pets. The Egyptians may have been the first people to keep pet cats, perhaps starting around 7500 BC.

But it’s also possible that West Asian people were the first to keep cats as pets. All these animals, coming from all sides of Egypt, show how Egypt was rich because it was located at a sort of crossroads between Africa and West Asia. This was where the good (and bad) things from many different places came together.

Did you find out what you wanted to know about ancient Egyptian animals? Let us know in the comments!