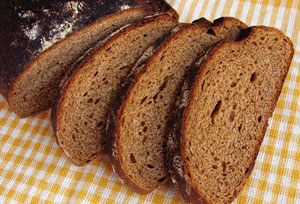 In 1500 AD, most people in Central Asia were still cattle herders, and they ate beef, yogurt, and milk from their cows just they way they had in the Middle Ages, under the Mongol Empire.

History of cattle
How do you make yogurt?
Early Central Asian food
All our Central Asia articles

But as Russia became more powerful and conquered more and more of Central Asia, Russian farmers moved further and further east, and they brought with them the habit of eating a lot of bread and porridge. They made people start farming and growing wheat and rye.

History of wheat
Why did they grow rye?
Where did oats come from? 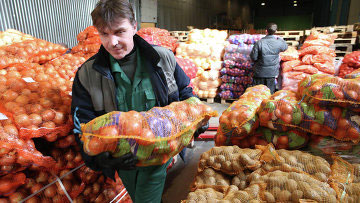 A man holds a sack of potatoes

Did they eat vegetables?

Russians also ate a lot of cabbage, beets, onions, and carrots – foods that would grow well in the cold Russian weather.

In the late 1600s AD, Peter the Great brought a new food from Europe to Russia – potatoes. At first people were very suspicious of this new food. But during a famine in the 1830s, under Czar Nicolas, people tried potatoes and liked them, and they became a staple food all across Russia.