Evolution of Horses – Where do horses come from? 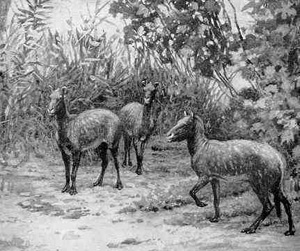 Eohippus – an early kind of horse

When mammals first began to grow larger, after the dinosaurs became extinct about 70 million years ago, some of them evolved into the earliest ancestors of horses. The first horses evolved in North America. They were about the size of dogs. They had three toes, lived in jungles and ate fruit.

Around 20 million years ago, with the world’s tropical forests drying up, some horses evolved to live on the steppe or prairie – on the grasslands of central North America. These horses had one big toe and smaller side toes, and they had long legs so they could run fast to escape from tigers and wolves. They were bigger, and they had their eyes on the side of their heads, instead of in front. By about 17 million years ago, these plains horses were eating grass instead of fruit.

Some North American plains horses used their long legs to run south to South America (like camels) about ten million years ago. About five million years ago, the North American plains horses evolved into modern horses with hooves, and some of them (again like camels) ran across the Siberian land bridge to Central Asia, where they must have been happy to find thousands of miles of grassland that they could live on. Some of these Asian horses slowly spread south across Asia and donkeys and zebras. Others stayed on the Central Asian plains, where they learned to eat apples and carrots.

Sometime around 10,000 BC, horses became extinct in both South America and North America (Camels also became extinct in North America about the same time). Probably this was partly because buffalo came over the land bridge to the Americas and ate the same grass as the horses, but more successfully. The end probably came when humans hunted and killed the last horses. In Central Asia, however, horses continued to thrive, and people domesticated them about 4000 BC. Today, there are pretty much no more wild horses – only domesticated ones, and feral horses (domesticated horses that escaped and became wild again).

Bibliography and further reading about the evolution of horses: