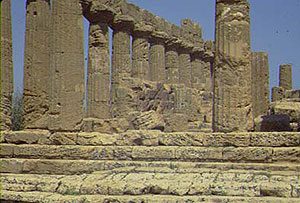 A Greek architrave: the stones running along the tops of the columns. This is the Temple of Hera – Agrigento, Sicily (ca. 450 BC)

Greek architects wanted to make the temples look more impressive. They started to build temples on top of small stone platforms with steps going up to them. That put the temples higher up, so they seemed bigger.

What is a fluted column?

This picture is from the Doric temple of Hera, also at Agrigento in Sicily. The Greeks built this temple about 450 BC. Can you see how the columns have lines running up and down them? That is to imitate the lines left by the axes which took the bark off the tree trunks, when columns were still being made from tree trunks. We call the lines flutes. 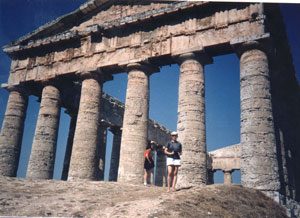 What is an architrave?

The Greek architrave is the part of the temple that is right on top of the columns, under the roof.

On this Doric temple from Segesta (also in Sicily, built around 430 BC) you can see the old tree-trunks that are now stone columns. And you can see the triangular roof (the pediment) which was once the wooden roof beams.

More about pediments
The Parthenon’s pediment

More about triglyphs and metopes
Rhythm in Greek temples