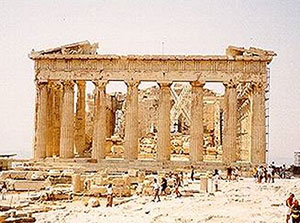 On the front of the Parthenon, in the triangular pediment, Pheidias carved the contest between Athena and Poseidon to be the main god of the city of Athens, and on the back pediment he put the birth of Athena out of the head of her father Zeus. Neither of these pediments is in good shape now. There are only pieces of the sculptures left, and they are in museums, not on the Parthenon itself, as you can see. 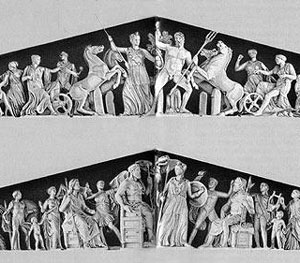 This is a drawing of what the Parthenon pediments might have looked like when they were new. The top one shows Athena and Poseidon arguing, and the bottom one shows Zeus sitting on his throne while the newly born Athena stands in front of him with her shield. But it’s misleading, because really the sculptures (like all other ancient sculptures) would have been painted in colors to look more like real people.