What is a midwife? History of childbirth 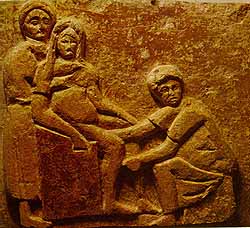 A Roman carving of a midwife at a birth (Isola Della Sacra, Ostia, 1st century AD)

Who delivered babies in the ancient world?

A midwife is a woman who helps other women give birth to their babies. In ancient and medieval times, doctors didn’t usually have anything to do with women having babies – that was the job of midwives. Most midwives had a lot of experience and knew how to deliver babies.

Midwifery as a business

Midwives gave advice to women in labor, and helped the baby to be born. They also knew the right sacrifices to make and what prayers to say for a safe delivery.

What is animal sacrifice?
Sacrifice in Roman religion

Families paid the midwife, first in food or cloth or beads, and later in money. Being a midwife was a good way for a woman to support herself. Midwives ran their own business, and it usually paid pretty well. On a larger farm, where there were many people working, the farm might hold an enslaved midwife. 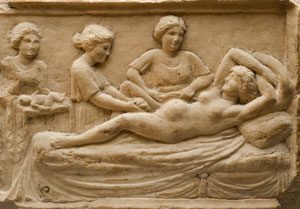 What did midwives know how to do?

Midwives helped women get through their pregnancy safely. They could tell whether you were really pregnant, and they knew when the baby was about to be born.

Some midwives used a special chair for the mother to sit in. Other women gave birth lying down on a bed or a couch. Midwives knew how to deliver a baby as safely as possible.

But that wasn’t very safe! Even the best midwives in both ancient and medieval times didn’t know a lot of things we know today. They didn’t know about germs, so they didn’t always wash their hands before taking care of women. They didn’t know how to do a Caesarian section without killing the mother from shock. If the mother had already died in childbirth, or was about to die, they could cut open her stomach and save the baby. (Interestingly, they could do Caesarian sections on cows and sheep, because even without anaesthesia the cows and sheep could survive the operation without dying of shock.)

By the Early Medieval period, there were procedures for doing emergency abortions if the baby had died inside the mother, to save the mother’s life, but we don’t know whether midwives could do this operation or only doctors. 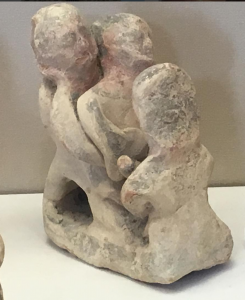 Childbirth on Cyprus, about 500 BC 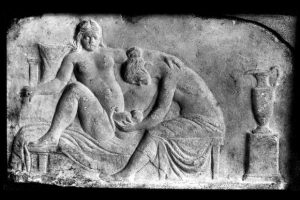 A Roman woman giving birth with the help of a midwife.

Many babies died while they were being born, and many women also died or were injured while they were having their babies, even if they had a good midwife. About one out of five women who were having a baby died. (These days, with modern midwives and hospitals, women die much less often, though women are still often injured in childbirth.)

Why do women still die in childbirth?

If a woman did die in childbirth, or if she didn’t have any milk, the midwife might also help to find a wet nurse for the baby. A wet nurse was a woman who breast-fed another woman’s baby.

What is a wet nurse?

Bibliography and further reading about midwives: