Sacrificing a cow, a sheep, and a pig in the Late Republic

Probably around the time people began farming their food and raising tame animals for their meat, which in Italy was about 5000 BC, people also began to sacrifice animals to their gods. This was the same thing people did in West Asia – including the Zoroastrians and the Jews – and in Greece at the same time. All through the Roman Republic, religious festivals, funerals, weddings, and any sort of ceremony required you to kill animals for the gods.

But by around the time of the Emperor Augustus, before 100 AD, animal sacrifice had begun to seem a little old-fashioned. Jesus lived about this time, and he didn’t ask people to do animal sacrifice. Instead, early Christians announced that Jesus’ own sacrifice in the Crucifixion was enough, as long as you had faith in him. In 70 AD, with the destruction of the Second Temple, Jews also stopped animal sacrifice. 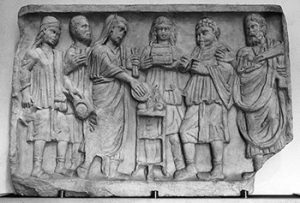 As there got to be more Christians, sacrifice briefly became more important as part of the persecution of Christians. Roman officials in Carthage and other cities tried to force Christians to sacrifice to the Emperor; if they didn’t, they were accused of treason and sometimes killed. But all of these forced sacrifices involved burning incense, not killing animals.

More about the end of sacrifice
Eid al-Adha
Christian communion