How did people eat in ancient Rome?

Spoons made out of bronze and animal bone from ancient Rome

Most people in ancient Rome ate most of their food with spoons. A lot of it was soups and porridge. The spoons in this picture are made of bronze and bone. But a lot of Roman spoons were made of wood.

Fancy rich people also used silver spoons, and forks like this bronze one. (It’s a myth that forks were not invented until much later, but Roman forks may have been mainly used for serving and cooking): 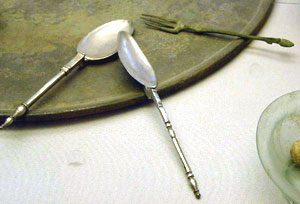 The main reason that Roman people didn’t use forks for eating their food was that they had no practical way to make a lot of forks. The fork in the picture is made of bronze. But bronze was too expensive, and not really strong enough, to make good forks for everyone to use. Wooden forks and bone forks would just snap off their tines as soon as you tried to use them. The Romans could make iron forks, but they would also break easily. They could make good forks out of silver, but silver was really too expensive for every day.

What you really want to use for forks is steel. That’s what our forks are made of today. The Romans could get steel. But they didn’t have any way to make steel cheaply. In the time of the Roman Empire, steel was an expensive thing that you used for swords, or for small things like sewing needles. There just wasn’t enough steel to make forks.

Learn by doing: try to carve your own wooden spoon

Bibliography and further reading about Roman silverware and dishes:

A Roman Villa: Inside Story, by Jacqueline Morley (American edition 1992). For kids, with lots of pictures.

The Roman Banquet : Images of Conviviality, by Katherine Dunbabin (2004). By a specialist, for interested adults. What Roman dinner parties were like, and how they were different from Greek ones.

Around the Table of the Romans: Food and Feasting in Ancient Rome, by Patrick Faas (2002).