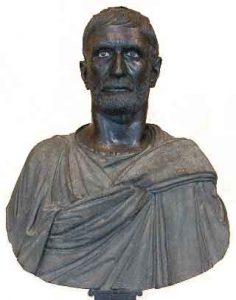 Around 500 BC, just as democracy was getting started in Athens, the Roman aristocrats (the rich people) decided they didn’t want to be ruled by Etruscan kings anymore. The kings were doing okay for the poor people, but the rich people wanted more power for themselves. But the rich people couldn’t get rid of the kings all by themselves. They needed the poor men to fight for them. So they promised the poor men that they could have a lot of power in the new government, if they would help get rid of the kings. The poor men agreed to help, and together the Romans threw out the Etruscan kings. 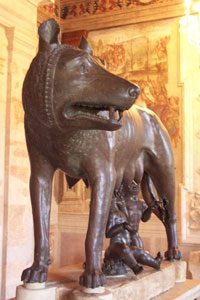 Still the poor men of Rome did not get as much power as the poor men of Athens. Instead of voting about what to do themselves, the Romans voted to choose leaders, who decided for them, the way the United States President and Congress do today. But the only people who could be elected to the Roman Senate were the rich people!

After another few years, the poor people of Rome still felt they were not being treated right. They made the aristocrats agree that the poor men could also elect tribunes. Tribunes had to be chosen from the poor people, and they went to all the meetings of the Senate. They could veto anything the Senate did which would be bad for the poor people. Veto means “I forbid it” in Latin, and it meant that the tribunes could forbid any law that was bad for the poor.

The poor people also made the aristocrats write down the laws and put them in a public square where anyone could read them (though not very many people could read). People called these laws the Twelve Tables. Like the Babylonian Code of Hammurabi, this stopped the rich men from pretending that there was a law about something when really there was not.

Meanwhile, the Roman army had been little by little conquering the Greek and Etruscan and Sabine cities around them. Now most people at this time, when they conquered a city, just took all the stuff they wanted, wrecked some buildings, and then went home and left the city alone. But the Romans, when they conquered a city, did something new: they made that city part of the Roman Empire.

The people who lived in that city got the right to vote in Rome (at least sometimes), and they paid taxes to Rome, and they sent men to be in the Roman army. Because of this new idea, the more the Romans conquered, the richer they got, and the more men they had in their army, so that made it easier for them to conquer the next city. Soon the Romans had taken over most of the middle of Italy.

Learn by doing: Roman weapons
More about the Roman Republic