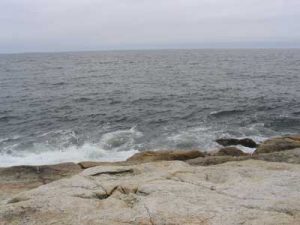 Long ago, the earth was just a big island, floating in a bigger ocean. The earth was hanging from four cords coming down from the sky, which was made of solid rock. It was dark all the time and the animals couldn’t see where they were going, so they got the sun and set it in a track to go over the island every day, from east to west, as it does now. 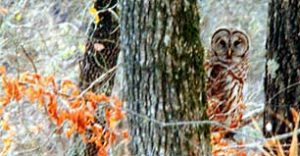 Trees and flowers and an owl 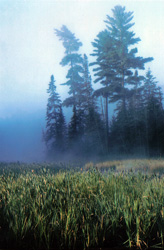 And God rewarded the plants that had stayed awake, and let them keep their leaves all year – these were the pine trees and laurels and cedars. God told the other trees that they would have to lose their leaves every winter.

Last came people, after all this. But once there were a few people, they had too many children and there were too many people. So the people decided that each woman would have only one child a year.

When the world gets old and worn-out, the people will all die and the cords that hold the earth up will break and let the earth sink down into the ocean, and it will all be water again.

More about the Cherokee
A Chinook Creation Story

Bibliography and further reading about the Cherokee creation myth: