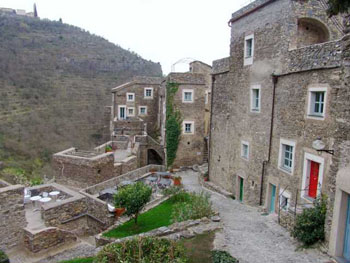 Houses in the Middle Ages were different from Roman houses in several ways. One important change was that more people lived in small villages for safety, instead of in farmhouses on their own land.

How did people heat houses?

Another change was that more people used fireplaces and chimneys to heat their houses and to cook on, instead of an open fire in the middle of the room. This made houses a little less smoky than they had been before (but they were still pretty smoky in the winter!).

Invention of chimneys
Hypocaust heat
Who invented the bellows?
History of fire

In southern Europe (modern Italy and Spain and southern France), people continued to build their houses out of stone and mud brick, as they had under Roman rule. Most houses had roofs made of clay tiles. To make it easier to live in small villages that people could defend against attackers, the houses became narrow and tall, with little high windows.

What is mud brick?
What is limestone?
How about half-timbering?
Thatched roofs

Not so many medieval houses are still around in northern Europe, because people there mainly built in wood. That was because there was plenty of wood around, so it was cheaper to build in wood. Or, to save on wood, people sometimes built with half-timbering. Some houses had tile roofs, but many were thatched. Very few poor people had their own houses. Many poor people – especially young people – lived in rich people’s houses, as servants or farmhands or employees. Sometimes they had their own rooms, but often, as in Roman times, they slept on the floor.

Learn by doing: build a castle
More about houses