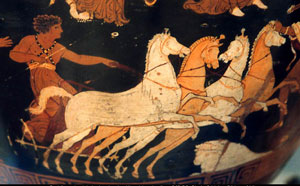 After Phaedra’s suicide, Hippolytus drives his chariot away (On a red-figure vase from Southern Italy, ca. 350 BC)

Phaedra – the second half of the play

So the clueless chorus is singing about the need for love and balance in people’s lives.

(What’s the beginning of Phaedra’s story?)

But suddenly Phaedra’s slave runs in to say that Phaedra has hanged herself! The slave finds a suicide note Phaedra wrote which accuses Hippolytus of raping her, and claims that she is killing herself out of shame (but this is lies, this is not true).

At this point Theseus gets home, and of course he is very upset to find Phaedra is dead. He’s even more upset when he reads her note.

(Who is this guy Theseus?)

When Theseus’ son Hippolytus comes home from hunting, Theseus accuses him of raping Phaedra. Even though Hippolytus understands what has happened, he won’t explain it. Maybe that’s because he doesn’t want to shame his step-mother. Maybe it’s because he thinks his own father should not be so willing to believe such a terrible thing. Once again, Hippolytus controls himself and says nothing.

Theseus, out of his head with anger, curses his son Hippolytus, and asks Poseidon to kill him. As Hippolytus drives his chariot away down the beach, Poseidon sends a great wave out of the ocean to drown him.

(More about the god Poseidon)

With Hippolytus dead, Theseus realizes that he should have had more self-control, and judged the case fairly rather than jumping to conclusions.

The playwright, Euripides, wants us to think about the difficulty of choosing the right amount of self-control – the middle path.

Too little self-control, and you’re like Phaedra, killing yourself foolishly over a crush. Or you’re like Theseus, cursing your own son without checking to find out what really happened.

Too much self-control, and you’re like Hippolytus, living a life without love, and refusing to speak even to save your own life. Wisdom, Euripides shows us, lies in a middle path.

Euripides also considers self-control in the Bacchae, where King Pentheus refuses to dance and party, and the god Bacchus takes revenge on him. And it’s a major theme of Homer’s Iliad, when Agamemnon decides to take Briseis away from Achilles.

(Read the plot of the Bacchae)

Euripides also wants his audience to think about justice. Does anyone get what they deserve in this play? Is Theseus a good judge? What does it take to be a good judge?

Another Greek play about justice is Aeschylus‘ play Eumenides, where an Athenian jury tries Orestes for murdering his mother. And a third example is Sophocles‘ play Antigone, where Creon tries Antigone for breaking the law and burying her dead brother.

(Read the plot of Antigone)

Did you find out what you wanted to know about Phaedra’s suicide? Let us know in the comments!

Bibliography and further reading about Phaedra and Euripides:

The Bull from the Sea, by Mary Renault. An excellent novelization of the story of Phaedra, for teenagers.

Euripides: Medea, Hippolytus, Electra, Helen, by Euripides. Translated by James Morwood. The text of the actual play, which is called Hippolytus in Greek.