Hellenistic sculpture by Praxiteles: Hermes and the infant Dionysos

At the end of the 400s BC, Greece, and especially Athens, was devastated by a terrible war which involved nearly all the Greek city-states, the Peloponnesian War. The end of the war left the Greeks too poor for much sculpture, but when people did begin creating new sculpture again it was in a new style.

There is more emotion, especially sad feelings like grief. There is more interest in children and women, who are sometimes shown without clothes now.

Portraits of individuals also became more popular, and sculptures of a wider range of people including enslaved people, foreigners, people with disabilities, and mythical creatures like satyrs and fauns.

Hellenistic statues show a new confidence. The figures move and twist in all directions. Statues show people with physical challenges, like this man with dwarfism.

The sculptor doesn’t mean to mock them. They’re encouraging us to show things as they are, instead of in the idealized form that Classical Greek sculptors showed. And they’re showing off that they can do hard things like showing people with their legs crossed or all wrapped up in veils. 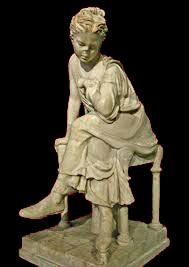 People in the rest of Europe and all across West Asia, Central Asia, and India also admired and imitated Hellenistic Greek sculpture.

There are several famous sculptors from the Hellenistic period. One was Praxiteles (pracks-IT-uh-lees), who worked around 340 BC (the same time as Aristotle). Praxiteles carved a statue of Hermes and the infant Dionysos. 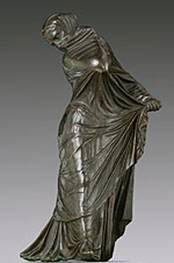 Praxiteles also carved a statue of Aphrodite which was so lifelike (people say) that men actually fell in love with it and tried to kiss it. But this one does not survive, only a later Roman version.

Another famous Hellenistic sculptor was Lysippos. He was famous for carving long, thin, graceful people, with smaller heads than the ones Praxiteles carved. It’s hard to know now exactly which statues Lysippos carved, and art historians argue about it. 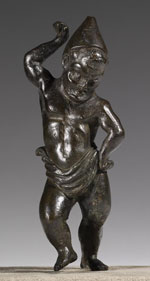 A man with dwarfism dancing (now in Walters Art Gallery)

Learn by doing: make a clay figurine of someone doing something
More about the Hellenistic period

Hellenistic Sculpture, by R.R.R. Smith (1991). Not so easy to read, but a good straightforward approach.

Art in the Hellenistic Age, by J. J. Pollitt (1986). This is more theoretical than Smith’s book, and might be harder going. It is more about why Hellenistic artists worked the way they did, rather than just a list of what they made.