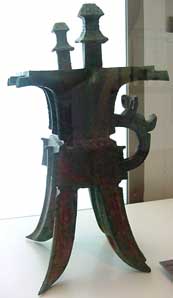 When did the Bronze Age start in China?

By about 2000 BC, people in China learned from the people of West Asia how to make bronze out of copper and tin. People started to make many jars and plaques (flat pieces) out of bronze to give to their gods.

The first jars were the best made

Right from the beginning, these bronze jars were super well made. You might think that Chinese bronze-smiths must have been practicing a long time to make such good bronze pieces, but this is really normal with any new technology. Artists are very interested in the new tech at first and do a very good job. It’s only later that they try to do it cheaper and faster and not as well.

How did artists in China make bronze jars?

These bronze jars and boxes were cast in molds using the lost-wax technique. Usually they were cast in several different pieces and then soldered (SOD-erd) together with melted bronze or tin. 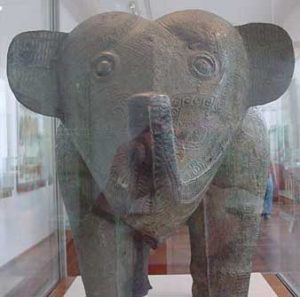 What kind of decoration do Shang bronzes have?

Some of the jars are plain with just a few lines cut (incised) into them. Other jars and goblets have lots of fancy decoration sticking out all over them. Some are abstract designs, others show plants or animals or mythical monsters like dragons. Some show demons, or human faces. 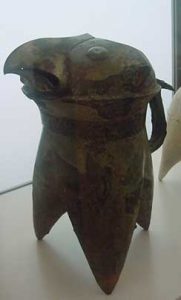 Shang Dynasty bronze pitcher in the shape of a bird (Musee Guimet, Paris)

Towards the end of the Shang Dynasty, about 1200 BC, people began to write messages on these bronze jars and cups using the earliest Chinese pictograms.

How did the pottery wheel get to China?

More about the Shang Dynasty