How to make a compass – China Activities

Who invented the compass?

Chinese scientists invented the first compasses, around the 200s AD, near the end of the Han Dynasty.

Science in ancient China
The Han Dynasty
All our China articles

These early Chinese compasses were very simple arrangements of an iron needle and a bit of cork, and you can easily make one just like them with this compass project.

On a sunny day, you can begin by making a sun compass. In the morning, find a stick and stick it in the ground pointing up. That’s your gnomon. Place a stone at the end of the shadow it casts.

More about the sun

Come back in the afternoon (after you’re done making the needle compass) and place another stone at the end of the new shadow. Put your right foot on the first stone, and your left foot on the second stone. Now you are facing south (reverse this if you are in the southern hemisphere). Behind you is north. Your left hand is pointing east, and your right hand is pointing west.

But suppose you wanted to carry the compass around with you, like on a ship? That’s what Chinese scientists figured out how to do.

a source of heat (a fire, or a cookstove, or a Bunsen burner), a needle, anything that floats (like a small piece of wood or a bit of a plastic lid), and a small container of water (like a cereal bowl or a yogurt container) big enough at the top for the float to spin around freely. And you need to know which way is north (you can use a sun compass for that!).

What is iron?
Steel and sewing needles

Heat up the needle until it is red-hot (don’t hold it or you will get burned! Stick it into a pencil eraser and THEN hold it in the fire!). Put it on a plate with the hot needle lined up north-south and let it cool. Then stick the needle to the float. Put the float in the water, and the needle will spin around to point north-south.

Or, if you don’t want to bother with heat, you can use any magnet to magnetize the needle, like a refrigerator magnet. Just hold the needle by one end and rub the other end along the magnet about 60 times. Be sure to always go the same direction, not back and forth! That should also magnetize the needle. One end will point north. 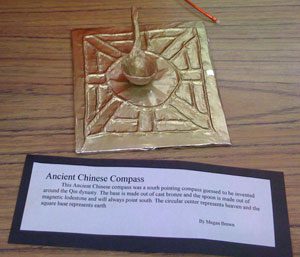 A model of another kind of Chinese compass by kids at Laurelhurst School, Portland

Some things to discuss: does your needle eye point north or south? (the ancient Chinese pointed theirs south, but Europeans generally pointed theirs north).

If you’re in a class, what percentage of your class ended up with north? Is that the percentage you expected? You could graph the results.If that’s north, which way is east? West? South?

Can you use the Internet to find out why iron works to make compasses but not copper? If you try to make a compass with copper wire, does it work? Would the world seem different to you if you pointed your compass south instead of north? Try looking at a world map upside-down.

What are compasses good for? What can you do if you have a compass that you couldn’t do before?

Can you use these compasses to make a treasure map where you have to go this far north, this far east (or whatever) to find the treasure?