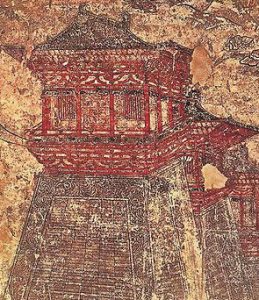 People have been living in the city of Chang’an in China since the Stone Age. But Chang’an reached its biggest size – about a million people – under the T’ang Dynasty, when the powerful T’ang emperors made Chang’an their new capital city. In 750 AD, Chang’an was probably the biggest city in the world, bigger than Constantinople or Baghdad.

All around the city of Chang’an there were big walls with many towers. Inside the walls, there were straight wide streets and big city blocks. No street was narrower than 25 meters, and the widest street, the Imperial Way, was 150 meters wide! In 740 AD, the emperors even planted fruit trees along the sides of the big streets. Five canals also ran through the city, to bring in food and firewood, water the many parks and gardens, and take out garbage.

Along the streets of Chang’an there were several palaces, a lot of Buddhist monasteries and Taoist abbeys, pagodas, and many private houses. Unfortunately not much is still there because when the T’ang Dynasty collapsed the leaders of the revolt – Chinese rebels – burned the city of Chang’an. Among the buildings that are still standing are Da Ci’en, or the Temple of Great Maternal Grace, several pagodas, and the Great Mosque, one of the earliest mosques in China.