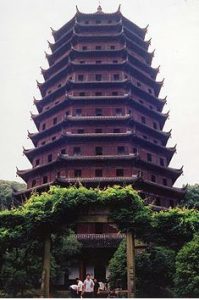 The architecture of the Song Dynasty, beginning in the 900s AD, continued the tradition of Buddhist pagodas. People wanted their pagodas to be tall and thin, with high spires. Architects started to build Buddhist pagodas out of stone. To make them fancier, pagodas had complicated wooden lattices all around them.

What is a pagoda?
More about Buddhism
The Song Dynasty
More China articles

An illustration from the Yingzao Fashi

During the Song Dynasty, in 1103 AD, Lie Jie wrote a book about architecture, the Yingzao Fashi. The Yingzao Fashi brought together older books about architecture in one book. The Sung emperor Huizong published Lie Jie’s book, so that there would be one set of standards for all architects in China. Lie Jie established standard sizes for lumber, and also standard rates of pay for the construction workers. 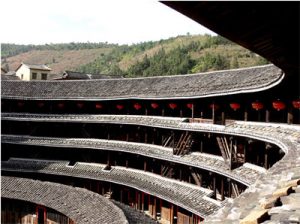 During the Southern Song Dynasty, in the 1100s AD, people in southern China started to live in a new kind of house called a tulou. These were big round buildings made of rammed earth on a stone foundation, and inside they rose high up with many levels of rooms around a central round courtyard. 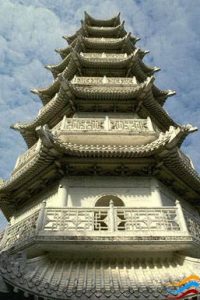 The tulou in the picture has 53 rooms on each level. Their roofs were of clay tiles. These apartment houses were popular because they were efficient to build and heat, using very little wood, and they also provided safety from bandits.

This is another example of a Song Dynasty Buddhist pagoda. Like the first one, it is tall and thin and built of stone. On this pagoda, the balcony railings are also carved from stone.