People didn’t build a lot of new buildings during the Umayyad period. They were busy getting organized after the Islamic conquests, and the Umayyad dynasty didn’t rule very long. But what they did build was new and exciting. The Umayyads, who were conquering everything, had pots of money to spend. The Umayyad caliphs wanted their architects to come up with new, unusual, special buildings to go with the new religion of Islam and their new Umayyad Empire.

Right away you can see that Islamic mosques are very different from Christian churches. Instead of being like a Roman basilica, long and narrow, the Dome of the Rock is hexagonal (six-sided). The architects may have been thinking of Roman funeral chapels like the Mausoleum of Galla Placidia, which were sometimes polygonal (many-sided) and covered with mosaic like this. Or they may have been thinking of early Christian baptistries, which also were polygonal.

Inside, the Dome of the Rock had a series of round arches all around it, surrounding a sacred rock. Muslims believed this rock to be the rock Abraham stood on when God spoke to him. These arches had stripes of dark and light-colored stone, which was a new idea in this building. 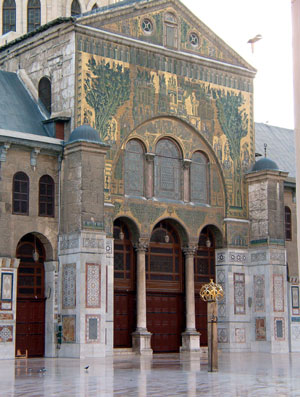 Another early Umayyad building was the Great Mosque in the Umayyad capital of Damascus (in modern Syria). They built the Damascus mosque about 710 AD. (for the interior, click here). The Damascus mosque was more like a Christian church or a Roman basilica. But you’ll notice there are no pictures of people on it – only plants and buildings, because Islam didn’t allow pictures of people.

Another Umayyad building was the Great Mosque at Cordoba in Spain, begun in 754 AD. The architects took the many columns from older Roman buildings, which is why the columns don’t match each other. This was partly because it was more efficient to reuse columns, but also to show how Islam had triumphed over Rome and destroyed their buildings to make new mosques. The striped stone arches, which are also found on the inside of the Dome of the Rock, became a very common choice in Islamic architecture. 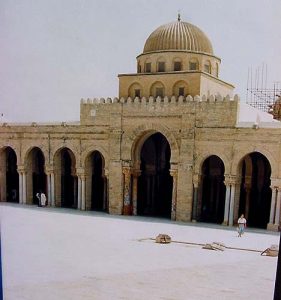 The Umayyad caliphs built their last major building in the 700s AD, in North Africa (modern Tunisia) – the Great Mosque of Kairouan. Kairouan’s mosque has the oldest surviving minaret in the world. Umayyad architects drew on all the newest and most exciting architectural ideas from all across Asia – pagodas, churches, mausoleums, baptistries – to create suitable buildings for the new religion: mosques and minarets.

Learn by doing: a mosaic project
More about the Umayyads
Charlemagne’s palace at Aachen