Who was Osiris? Egyptian god 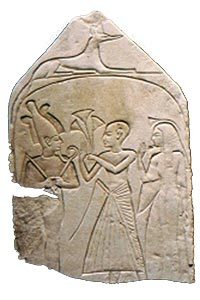 Osiris was an ancient Egyptian god of growing things, like the Hindu god Indra or the Greek goddess Demeter. That’s why sometimes Osiris’ face is green, like the Nile river whose floods made a good harvest in Egypt. Osiris was the oldest son of the earlier Earth god Geb and the sky goddess Nut; this makes sense because that’s how plants grow – the earth works together with the sky. As the king of the gods, Osiris wears a pharaoh‘s hat and carries a shepherd’s crook and a flail for beating barley. Like Demeter, Osiris had brothers and sisters. As Demeter had her daughter Persephone with her brother Zeus, Osiris married his sister Isis.

As early as the Old Kingdom, about 2000 BC, people were already thinking of Osiris as the god of the afterlife and rebirth, as well as the god of growing things. Growing things come up out of the earth and go back under the earth as seeds, and then come up again, so many cultures think of plant gods as also the gods of rebirth. (Compare the Greek story of Persephone, or the West Asian story of Magna Mater).

In one Egyptian story, the god Seth tricked Osiris into getting into a wooden chest, which he then threw into the Nile river to get rid of Osiris (Compare the Greek story of Perseus). When Isis found the chest and took her brother’s body out to bury it, Seth cut Osiris’ body into pieces and scattered the pieces all around Egypt. Isis searched and found all of the pieces of her brother’s body and brought them back together, where she blew life back into the body. When Osiris came back to life, he and Isis had a baby, Horus.

Egyptians in the Old Kingdom thought of the living Pharaoh as being like Horus, and the Pharaoh’s dead father as being like Osiris. Later on, people thought of even ordinary dead people as being like Osiris. Still, people even in the Old Kingdom thought it was kind of yucky to be dead under the ground, and that it would be nicer to be dead up in the sky, with the sun god Ra. By the New Kingdom, about 1500 BC, people combined these two ideas to think of Ra and Osiris as the same god, where Ra was the day-time form of the god and Osiris was the night-time form.

Bibliography and further reading about Osiris:

The Egypt Game (Yearling Newbery), by Zilpha Keatley Snyder (reprinted 1985). A great story about kids who pretend to be Egyptian gods and goddesses.