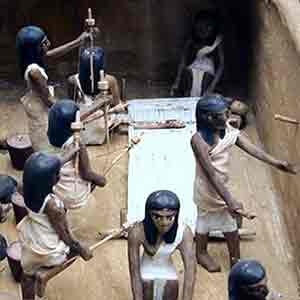 Like other Africans, Egyptian people had dark skin to protect them from the African sun. They were further from the Equator than Central Africans, so their skin was lighter than the skin of people living in Central Africa. But most Egyptians still had pretty dark skin, especially if they lived in Upper Egypt, near Sudan. Egyptian people spent most of their time outside, where the light was good, since it hardly ever rains in Egypt. Mostly they were farming, but they also made clothes, built houses and made furniture, and sailed boats. 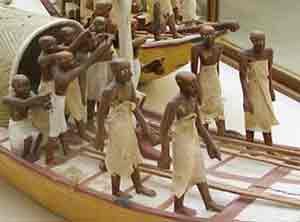 From the same tomb, men on a boat

Most Egyptian kids lived with their fathers and mothers in a family. Most kids had a lot of sisters and brothers and cousins. They lived in small apartments with courtyards, often with just one room for their whole family, or even two families sharing a room. Very few Egyptian children went to school, and even fewer went to college.

Mostly kids worked in the fields farming alongside their mothers and fathers. Many Egyptian children were enslaved. Children who were enslaved also farmed and made cloth, but they got less food and were more likely to be beaten.

Learn by doing: learn to spin
More about slavery in Egypt
More about African people