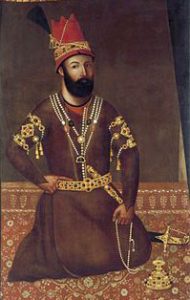 Nader Shah fought hard to get back a lot of the land that the Safavids had lost. He began his career as a general by pushing out an Afghan invasion and recapturing much of Afghanistan for Iran. Then in 1730, he attacked the Ottomans and got back most of Iraq from them.

In 1738, after capturing Kandahar, Nader Shah was ready to attack the Mughal Empire in India, which was getting too weak to defend itself. The next year, Nader Shah captured Delhi – killing tens of thousands of people – and the Mughal ruler, Mohammed Shah. Nader forced Mohammed Shah to hand over the keys to the Mughal treasury and his famous Peacock Throne. Nader Shah got so much money from India that he didn’t collect any taxes in Iran for the next three years 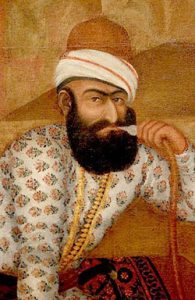 By 1743, with Nader Shah busy winning Pakistan back from the Mughal Empire, the Ottomans were able to coordinate their attacks with the Mughals and get Iraq back again. In 1747, assassins killed Nader Shah.

After Nader Shah died, there was a lot of fighting over who should rule Iran. By 1760, the kingdom broke into two pieces, with Karim Khan – a Kurd – ruling Iran, while Ahmad Shah Durrani started the country of Afghanistan. 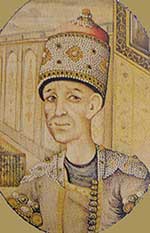 Karim Khan was a great ruler, who brought peace and riches to Iran during his reign. He opened up a relationship with Britain, and the East India Company began to trade with Iran. But when Karim Khan died in 1779, there was another civil war. Iran grew poorer, partly because William Pitt in Britain started cotton plantations in Africa that took away business from Iran.

By 1794, all of Karim Khan’s kids were dead, and Mohammad started a new dynasty in Iran. He was a eunuch – that’s why he doesn’t have a beard. So he couldn’t have any kids of his own. He expanded Iran’s power to control Georgia (to the north) and Khorasan (to the east) again, and successfully fought off Catherine the Great’s invasion in 1796. (It helped that she died in the middle of it.)

Iran in the 1800s
More about West Asia
Quatr.us home