Sargon of Akkad gradually conquered the area between the Tigris and the Euphrates rivers around 2300 BC.

Who did Sargon conquer?
More about Mesopotamia

The Akkadians spoke a Semitic language, like the Amorites. Sargon, according to Sumerian literature, was born to an Akkadian high priestess and a poor father, maybe a gardener. His mother abandoned him by putting him in a basket woven out of reeds and letting it float away down the river (like Moses a thousand years later). But Sargon was rescued, made friends with the goddess Ishtar, and was brought up in the king’s court.

Who is the goddess Ishtar?
Bible story of Moses

When Sargon grew up, he built himself a new city at Akkad, and made himself the king of it. Then he gradually conquered all the land around him. Sargon built the first empire that we know of: the Akkadian Empire.

Sargon also brought to West Asia the new idea that when a king died, his son should be the next king; before this the rich men of each city had elected their new king.

What is a monarchy?
Definition of an empire

Sargon also helped to unify his empire by making his daughter Enheduanna the high priestess for life of the moon god Nanna at Ur, and also the high priestess of the sky god An at Uruk. Enheduanna became very powerful. She also wrote two long sets of hymns (songs for the gods), both of which insist that it is good and natural for Sargon’s empire to be unified. She is the first author whose name we know, man or woman, anywhere in the world.

All about Enheduanna
Monotheism and polytheism 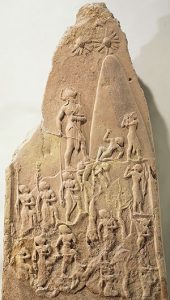 Sargon’s sons succeeded him as king of the Akkadians when he died, first one and then the other. When they were assassinated (first one and then the other), Sargon’s young grandson Naram-Sin became king. Naram-Sin ruled a very long time – 56 years! – and very successfully. His Akkadian Empire stretched from Lebanon on the Mediterranean coast, up north into what’s now Turkey and south to the Persian Gulf.

Naram-Sin’s own son Shar-kali-Sharri became the next Akkadian king, but Shar-kali-Sharri failed to hold the Akkadian Empire together, and around 2100 BC the empire gradually fell apart into a bunch of small kingdoms and cities as it had been under the Sumerians.

What happened next? The Third Dynasty of Ur

Learn by doing: draw your own stele showing how great you are
Akkadian Art
Ziggurats
The Third Dynasty of Ur

Bibliography and further reading about the Akkadians: