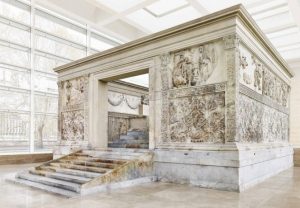 The Ara Pacis – the Altar of Peace. Originally it was outside, but today a roof protects it.

Who built the Ara Pacis?

When the Roman emperor Augustus took over Rome after the civil wars at the end of the Roman Republic, about 30 BC, he built a Altar of Peace (Ara Pacis in Latin), to show that the fighting was over.

Why did he build it?

Augustus was very interested in Greek art, and in showing how civilized Rome was by taking Greek art styles and developing them into a new, sophisticated Roman style.

What is on the frieze?

The frieze shows Marcus Agrippa (on the left, with his head covered), leading a procession to dedicate the Altar of Peace (Augustus is on the other side). They’re going to do an animal sacrifice at the Altar. When the Altar was new, it would have been painted so the people looked more real.

Where did the artists get the idea?

In many ways, this frieze is like the Parthenon frieze of four hundred years earlier, which also shows a procession.

More about the Parthenon

But it’s also like the procession carved in stone at the Persian palace of Persepolis, a little earlier than the Parthenon.

Bibliography and further reading about the Ara Pacis:

The Artists of the Ara Pacis: The Process of Hellenization in Roman Relief Sculpture, by Diane Atnally Conlin (1997). Specialized, but an award-winning study of the Greek influence on the carving of the frieze – concluding that Roman carvers did the actual work.